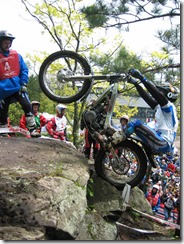 The local trials organization is the Upper Midwest Trials Association (UMTA, http://umta.org/), where you can find the year's schedule (6 two-day events for 2013, since the first one was cancelled due to snow), see this and past years' event results, find used trials bikes, locate local dealers and parts suppliers, and join forums to talk about trials bikes and riding. There are excellent pictures of local riders and events on the UMTA site, too. 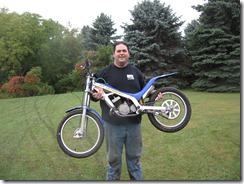 A lot of really knowledgeable people (including our publisher, "AKA the World’s Largest Trials Rider" and the UMTA's secretary) might argue that the ultimate off-road motorcycle sport is motorcycle trials, traditionally called "observed trials." While the fine-points of trials rules are sometimes as hard to fathom as golfing rules, the basic idea is you ride over ridiculously difficult obstacles without stopping or putting your feet on the ground or the obstacles. Do either and you collect unwanted points. If you manage to avoid collecting points, you win. If that sounds easy, you should try it.

The Winterers (Jim and Ben) are one constant in Minnesota trials is that you will unavoidably run into. Jim is a consistent Senior class competitor and Ben is a regular top-3 in the Champ class. Jim was gracious enough to introduce me to several wonderful sources and and he pretty much wrote the article for me in a couple of email responses. Mark Dittman, the UMTA treasurer said, "Ages in our club range from 7 years old to 70 years old. Our club members come from all over the state of Minnesota and some from Wisconsin . . . we have 9 different classes to compete in and there is a skill level for everyone. 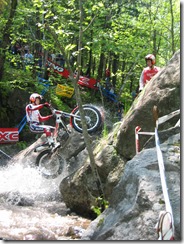 "The biggest misconception is that everyone hops the bike around. Ninety percent of our club riders do not hop the bike around. I think people feel a little intimidated by that. There are some expert class riders in our club that do not hop, but they can turn the bike on a dime and do some incredible things on a trials bike." 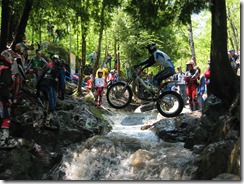 In the US, participation in trials peaked in the mid--to-late-1970's. At that time, there were several world-class American riders, Martin Belaiir, Marland Whaley, Lane Leavitt,  and the one-and-only American World Champion, Bernie Schreiber (1979). In recent world events, US riders consistently fill out the tail-end of every US event (the Wagner Cup) and few Americans have made the effort to compete on the world stage. Outside of the US, trials has maintained a fair presence, especially in the indoor format (X-Trials), and world events draw large crowds in several countries.

Trials is the kind of sport that attracts riders of all ages. Due to typically low speeds, extraordinarily light motorcycles, and short sections with minders, helpers, and observers who sometimes morph into catchers as do the spectators, people compete well into their 60's and 70's at a variety of competitive levels. Minnesota and Wisconsin are specially blessed with a strong, if small, group of dedicated trials competitors and if you are interested in trying this sport out, you'll find it is a great group of friendly and helpful people.

Due to the light US participation, manufacturers make a half-hearted attempt at importing bikes to the US. Currently, Sherco, Gas Gas, Beta, Ossa, and OSET (electric kids' bikes) are imported to the US. The US Montesa-Honda distributor was based in Minnetonka until Honda discontinued importing in 2005. On the upside, there are still a fair number of used 1970's to 2000's trials bikes for sale for reasonable prices. Many trials bikes are in pretty good shape even after a few decades of competition and will be more than serviceable for many years. The only motorcycle I've ever been sorry I sold was my 1986 Yamaha TY350.