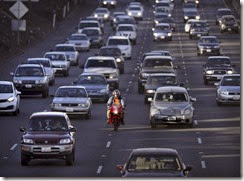 California’s Office of Traffic Study looked at lane splitting for a year and concluded “the practice is no more dangerous than motorcycling in general, if the rider is traveling at speeds similar to or only slightly faster than the surrounding traffic.” The Sacramento Bee did a pretty good review of this study called, “Motorcycle lane-splitting study finds: the more speed, the more danger.” The article and study found that “Lane-splitting in California appears to be on the rise. The state Office of Traffic Safety study found 62 percent of motorcyclists say they lane-split on both freeways and other roads, a 7.5-percentage-point increase over 2013. Seventy-five percent of riders between the ages of 18 and 24 report they lane-split on all roads, including freeways. Notably, the survey found that motorcyclists were splitting lanes at slightly slower speeds and in slightly slower traffic than the year before.” The last part surprises me and is encouraging. Maybe California’s motorcyclists are beginning to wise up a little. If they do, it will be to the benefit of all of us. Lane splitting and filtering are the single most important issue that makes motorcycle commuting beneficial.

As in most areas, the US lags the world here and we appear to be going backwards rather than forward. If you think your right to illegally and obnoxiously loud pipes is more important than lane splitting, you are the problem. You’re not part of the problem, you are the problem and motorcyclists everywhere should join with the rest of society and give you the finger when you rattle and blast your plodding way along public roads.

Hi there. I'd just send you an email, but I can't find one, so I hope you don't mind if I ask my question here in the comments.

I'm new to riding so I know almost nothing. After buying a helmet (full face, bright green Icon Alliance. Maybe you remember it from when from when I took your course in September) I started wondering if it actually fit me properly. See, it locks down tightly around the my skull, so that I can't wedge my fingers between under the front and my forehead. However, there's a bit of play between my cheek and the cheek pads so that they lose contact when I wobble the helmet back and forth. I've heard that is an indication of a problem with the fit. I have almost no fat in my cheeks, so maybe that's a factor. In short, it seems to fit my skull perfectly, but not my face.

My question is this: would you, in your opinion, consider the above problem enough of a safety issue to justify getting an entirely new helmet, or is the fact that it fits very snugly around the skull the most important factor? Any input you might have would be appreciated.

I hope you don't mind, but I'm going to make your question into a whole blog entry. It's a good one.