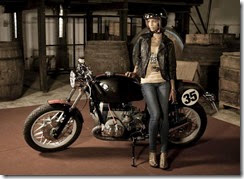 In the end-of-season letter to Minnesota motorcycle trainers, Bill Shaffer noted, “While the final numbers are not in, it looks like we’ll train fewer students than last year, and with the number of registered motorcycles falling last year for the first time since 1995, I think we’ll be training 5,000 to 6,000 students a year for a number of years to come. Also, a lot of the baby boomer generation is getting to that age where they may not start riding if they haven’t already done so, and a number of their kids, the ‘boomlet’ generation, are trading motorcycling in for mortgages and families. Hopefully I’m wrong, but I don’t think we’ll see the big number of students, that we did six to ten years ago, for some time.” I, sort of, hope Bill is right, since I need to find someone from the “boomlet” generation to buy my Little Canada house. Mostly, though, that generation is not buying much of anything but expensive coffee, lots of booze, video games, and cool clothing at over-priced second hand stores.

When I first got back from New Mexico I had a head-full of the stuff a fellow camper had told me about the motorcycle and vehicle industry. He is a semi-retired ex-Motorcyclist, Cycle World, Powersports, etc writer and editor. Like a lot of RV-ers, he never volunteered his name and, in kind, I never asked. Darwin Holmsted and I think we know who he is/was, but I suck at facial identification and pictures almost never tell me much. This retired writer and I spent a lot of mornings between the campground shower and our respective campers talking about where the industry/business/sport had been and where it was going. When we weren’t talking about that, he had a good time describing his perspective on my comedic deep sand riding experiences from the previous day. He had a DL1000 in tow behind his Class B camper, but I never saw it unhitched. I attempted one picture of his rig next to our at Elephant Butte and another camper rolled past right when I hit the digital shutter. I took another when he was “camped” in a neighborhood in TorC and I can’t find that one anywhere, now. His camper and trailer both had California plates. That’s all I have for identification.

Anyway, he was full of doom-and-gloom from the industry side of the rider/driver equation. None of it was stuff that he was ever allowed to write about because the industry thinks happy talk will sell vehicles. So far, it's not working.

To sum it up, there are at least a couple of current and upcoming generations that are about as interested in owning/driving/riding vehicles as they are in buying CDs or any kind of music, going to movie theaters, owning homes, playing musical instruments, doing manual labor, etc. A lot of things that previous generations took for granted as "necessary skills" are solidly untrendy. Motorcycling is one. Owning a car is another.

I know a few hipsters who proudly bought a 70's or 80's motorcycle, spray painted it black, got pictures of themselves on the bike in tight black pants, designer leather, and an 80's open face helmet and put the bike back in the garage indefinately. It's all about image. You don't have to actually ride to maintain the image, just repost your picture on Facebook occasionally. I’m sure I’ll hear the usual suspects whining about my disrespect of their lifestyle. When you’re right, you’re right. I do, in fact, have little damn respect, tolerance, or interest in the lifestyles of the chronically boring, wealthy, sullen, idle hipsters of any generation. Always have, always will. 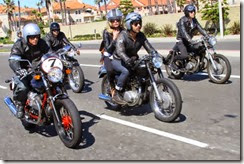 In an academic paper titled, “Marketing to the Generations,” the authors stated, “Baby Boomers are [were] a good market for travel, adventure vacations, expensive restaurant meals, second homes, recreational vehicles, maintenance-free homes, personal chefs, personal trainers, motorcycles, and financial advisors.” There were no such claims for “good market” of anything for either Gen-X or Gen-Y. In fact, the paper mostly discussed the media most likely to “reach” those two groups without any positive indication that once a marketer had found his target market they would be interested in or able to buy any significant products. It is legitimate to classify Boomers as a marketer’s wet dream. We are a bunch of silly suckers. I have a really hard time imagining aging X-gens populating smelly, noisy, ugly casinos.

Those open face helmets just look all kinds of stupid.

Way back in my MMM motorcycle reviewing days, I managed to end up at Victor's place with my Shoei full-face still at the dealer's, after dropping off the test bike. Victor loaned me the ugliest 3/4 helmet on the planet for the ride home and took a picture of me riding away from his house with that damn thing on my head. That picture is out there in the world, waiting to embarrass me if Victor ever feels the need for revenge. I'm always amazed to see people putting these ridiculous things on their heads intentionally.