"I gotta hand it to you. I couldn't ride 6,000 miles across country by myself." I've heard that a few times, but I haven't been able to explain how untrue that assumption is. There isn't a place in the country where you can be alone for long. In fact, as Ted Simon said at the Very Boring Rally II this summer, "You aren't alone anywhere you go on this planet." There are people everywhere and they are, mostly, pretty friendly and helpful. Sometimes, they are a little too interested in what you are doing, where you are going, and why you are going those places and doing that stuff.

For example, I was riding in the Yukon last summer with a friend when I managed to get blown backwards and crash on the Dempster Highway. My riding buddy was about 1/2 mile ahead of me and managing his own problems. So, by the time he discovered I wasn't inhaling his dust I had picked myself and my bike up, patched up the busted stuff, and was ready to struggle my way back to asphalt when he showed up. About the same time, a trucker stopped and offered to satellite phone for help. Of course, if I had slid off of the road into the permafrost nobody would have found me or the bike when we sunk into the muck.

My favorite example was in Montana on a dirt road to a microscopic place called Helmsville. The road to Helmsville is between a two-lane highway from nowhere to another two-lane to the grand village of Lincoln, MT. The road is paved for the first few hundred yards, turns to loosly packed clay punctuated with sections of deep gravel and sand. There were no signs that anyone had driven County Road 271 since the last wind or rain storm, not a track in the gravel. About 50 miles into this adventure, I needed to stop and relieve my bladder. I found an abandoned corral with an even more abandoned outhouse outside the gate. The outhouse floor was collapsed, so I chose to water the weeds by the door. About the time I got an unstoppable stream flowing, a flatbed full of high school girls drove by, waving and whooping, "Yooo-whooo!"

I'm pretty sure they'd have stopped to rescue me, if I'd have needed rescuing. As it was, they kept moving without asking about my well-being or vehicle status. I don't blame them. I wasn't even secure enough in my position to wave back.

Later that summer, my wife and I were on a 40th anniversary trip around the Iron Range and points surrounding that territory. We were on a dirt road detour around the construction on MN Highway 1 to Ely, when I discovered a cool two-track path to a hidden lake. We dirt biked our way down the path to where it dead-ended at a picture perfect lake. It was absolutely quiet; again, no signs of any other vehicle having been on the path. We enjoyed the lake and the privacy for a half-hour or so. Before we headed back to the main road, I decided to get rid of the morning's coffee. Once again, at the point of no return, a couple wrangled their pickup and boat trailer down the road and headed down the path to my watering hole. 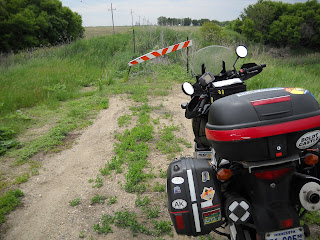 I'm telling you, there is no such thing as a place to be alone on this continent. Anywhere you go, someone is there to share the planet with you. You might as well travel without food, tools, clothing, or shelter. While they are in your space, you might as well borrow something from them. At least ask for spare change. I know I can't go anywhere without someone asking me for money, why should you be any different? If you really get insecure, feeling alone in the world, whip it out and relieve yourself. If your luck is anything like mine, a truck full of high school girls will be along any minute.

On a motorcycle, you're pretty much by yourself as long as you are rolling. No matter how many folks there are in your "rolling bowling pin" traveling configuration, nobody but you is in control of your bike. Assuming you are in control, that is. Once you get off of the bike, though, it's harder to find privacy than it is to instigate an intelligent conversation in Missouri. 300 million citizens in the US amounts to about 85 people per square mile. Eliminate Alaska's 1.16 person per square mile ratio and that state's 572,000 square miles and the nation's grazing ratio is 101 people per square mile. That's a lot of people for every 640 acres; one of us for every 6.4 acres in fact.

Being "alone" is a relative thing. Simply being outside of your neighborhood is a long ways from alone. Not being able to hear the rumble of traffic doesn't mean you are out of the reach of civilization or humanity. A bonus that comes with traveling alone is that you are almost forced to make new acquaintances and friends. If you let yourself get into the traveler mode, you will meet people you'd have never known about if you had stayed home.

Being alone is probably scary. I wouldn't know, I've only been to places where I'm surrounded by other people; as few as 1.16 of them per mile2 in Alaska and as dense as more than 500 per square mile in the eastern states and way more than that in the cities. Since man is the "most dangerous animal," being alone is probably safer than being surrounded by people. Still, sometimes it's comforting to know that anywhere I go I have the opportunity to be part of a community, if only temporarily. Starting off by myself means that I get to chose where and when those opportunities happen. That's as alone as I can get.