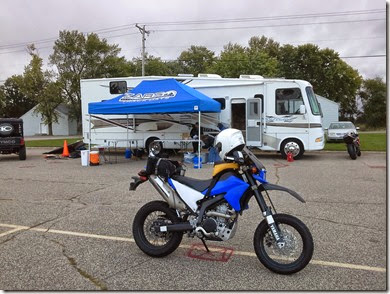 How do you know you’ve had a good day riding with folks at Zalusky Advanced Riding School (ZARS)? According to Jessica Zalusky and her professional instructors, your legs are worn out. So, what does it mean when all of you is worn out after an eight hour day riding and learning how to ride smoother, faster, and smarter? In my case, it means “You’re old, out-of-shape, and . . . old.”

One of the perks of being an instructor for the Minnesota Motorcycle Safety Center’s MSF program is connecting to the state’s other motorcycle training programs. This past Sunday, I was invited to participate in one of the ZARS cornering courses. So, from 8AM till 5PM, with breaks for recovery, “classroom” discussions, and lots of water (and coffee) I abused my WR250X and myself on the Dakota County Technical College Decision Driving Range. If you’ve ever watched me ride, you know I have more bad habits than good and the ZARS coach, Joe Mastain, assigned to me and one other rider had his work cut out for the day. Fortunately, the other guy was young and competent, so Joe only had to cope with one thick head. 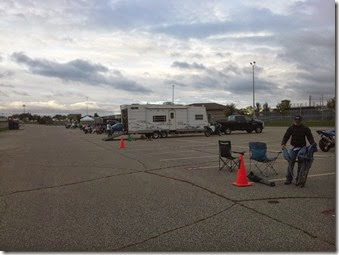 There is a lot about going faster on pavement that is uncomfortable to me. For almost 30 years, my basic riding  philosophy has been “if you’re not slidin’ you’re not ridin’.” That’s an easy, fairly non-threatening concept on dirt, but pretty much impossible (for me) to apply to pavement. For starters, sliding on pavement involves going a lot faster than I am willing to go. So, I have been in a never-ending battle with my off-road habits and what little understanding I have of traction, lean angle, steering mechanics, and body position. The more hours I get in the saddle, commuting and riding in ordinary situations, the more I revert to my old habits. After spending the winter bombing around New Mexico dirt roads and that state’s decrepit paved roads and playing on Elephant Butte Park’s massive beaches, returning to the predictable traction of the MSF class ranges and Minnesota’s almost-Scandinavian fixation for maintaining pavement was almost a shock. For most of my 2013 ntraining season, I had to pretend that I knew what I was doing with the MSF curriculum because I really wanted to stick a foot out and try to steer with my back tire, like I’d been doing for most of 7,000 miles the past winter. I’ve pretended to know what I’m doing for most of my life, so getting through basic motorcycle classes wasn’t a huge functional shift. The “Seasoned Rider” classes, on the other hand, sometimes felt disingenuous. While I was encouraging my students to keep their feet on the pegs and knees against the tank, I could empathize with their inclinations. I had ‘em, too. 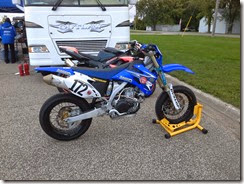 The ZARS program breaks rider skill into six categories: 1 through 6, in fact. I’ve spent a fair amount of time playing around at the DCTC course, but between the facts that I would be riding a 250 in a liter-plus-world and the more important facts that I’m old and slow and haven’t taken a ZARS course before, I signed up as a Level 1 student. If Level 1 turned out to be too remedial or slow for me, I could always ask to be upgraded to Level 2 or an instructor might suggest that I move up a grade.  At this late point in life, I don’t have a lot of ego invested in many things and being fast or looking cool are just not likely scenarios. The added advantage of starting as a beginner is that I took some pressure off of myself. “Keeping up” wouldn’t be nearly as difficult, I hoped, if I stuck with the beginners. Of course, there are no real “beginners” in a course like this. Riders who have enough confidence to put themselves in a situation where they have no chance of being the quickest people on the road are, by definition, experienced, competent motorcyclists.  Beginners are the clowns to show off on public roads without a clue how slow, out-of-control, and incompetent they really are until they are sliding down the asphalt and preparing to provide much needed organs to people who have been patiently waiting for a donor cycle to make a donation. 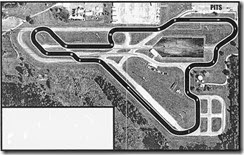 The course material was no problem, but it was fun listening to someone else say many of the same things I say in an elevated training situation. The DCTC range has a fairly long back straight and a moderately long front straight and my unwillingness to flog my 250 to keep from getting passed on the straights pretty much confirmed the decision to stick with the intro class. I could hang with most of the folks in the corners and for the first couple of sessions the people who passed me on the straights were boring the crap out of me once we hit the turns. Once I had a pack in front of me, I resorted to practicing countersteering with one hand while I waited for them to rocked off on the straight sections. By the end of the morning sessions, that problem resolved itself. Everyone got a lot faster. The first afternoon session, I threw away my machine-friendly attitude and hammered my poor little bike on the long straights so that I could maintain some room to play in the corners. A WR250X being beaten into submission is not a pretty sound and, realizing that I’d be riding my “race bike” back home forced me to rethink that whole philosophy for the rest of the day. ZARS coaches, Brent and Debby Jass (the owners and trainers of the Ride Safe, Ride Smart MSF program) and old Minnesota Sportbike friends, gave me a few things to work on, instead of the one-handed tactic, and that helped a lot. By my fourth time out, I was using all of the track, sometimes exploring the fast line and sometimes pushing my bike into what could be passing lines if we were allowed to pass in the corners. Using their tactical suggestions and working on Joe’s many excellent criticisms of my “dirt bike” riding technique, I was able to put my bike pretty much anywhere I aimed it at cornering speeds that would have made me really uncomfortable earlier in the day. 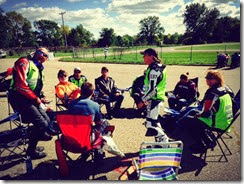 Our group’s head coach Karen Eberhardt (also an MMSC MSF coach) and the ever-present and incredibly upbeat Jessica Zalusky provided a solid structure for “classroom” discussions between riding sessions and breaks. All of the coaches were available for discussions, criticism, and instruction any time a student was interested in extending a conversation beyond the course materials. I’m pretty sure Joe got about 15 minutes of break time for all of Sunday. (Sorry about that, Joe. Retired people are lousy time managers.) The whole organization is incredibly customer oriented. I don’t think I’ve been asked “Are you having fun?” so often any time in my life. I was, by the way. ZARS is a terrific organization and we are incredibly lucky to have a motorcycle training group like this in Minnesota. One more reason why we put up with Minnesota winters.

Next weekend, Sept 27-28, is ARS Appreciation Weekend Riding at DCTC. A day of closed-course riding costs only $50! It will be your last DCTC chance to experience this great group of dedicated motorcycle fanatics in 2013. Saturday’s event includes a free barbeque at the end of the day. Level 3-6 places were filled as of Sunday night, yesterday. There is no Level 1 for that event, but there were still Level 2 spaces available when ZARS closed up the company RV last night. The last ZARS event of the year will be at Brainerd International Raceway on October 3, 2013. If you want to find out how fast (or slow) you really are, this is the track to make that discovery.
Posted by T.W. Day at Monday, September 22, 2014