Your Opinion? Who Cares? 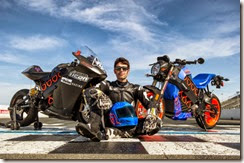 Cycle World e-published a nice interview with Eric Bostrom, Brammo’s main road racing competitor. Eric is clearly sold on Electric Vehicle’s future and anyone who has a clue about world fuel resources would be on board with him. Like most Americans, the comments after this article demonstrates that at least Cycle World’s readers are clueless. I mean embarrassingly, brainlessly, humorously clueless. After reading these brain-farts I think I lost 10 points off of my IQ:

“I have challenged Cycle World a few times to take a real ride, from LA to San Diego and back for example, a ride that could easily happen to many riders in SoCal, and compare the meanest, best of the E-bikes against a 300cc Ninja. I know the price differential will be huge, but drive em side by side for a trip like that, and then report all the details of the experience--not the politically correct version. Just the truth please.

”I already know the result, and that's why Cycle World ignores such a suggestion.” (Wrong. They ignore you because you’re a moron and no one cares what you think.)

“Now, I would like to point out a few flaws in the author's logic. First, he stated that the electric bikes would be easier to ride, because you would not have to use the clutch or shift. Most experienced riders should be at the point where clutching and shifting is pretty much muscle memory, and happens almost instinctively. Yes, a new rider may find the electric somewhat easier, but not much when the rider still needs to learn throttle control, as well as how to brake smoothly, along with smooth steering and paying attention to what is goin on around him.” (You probably believe in multitasking, too. Wrong again, Bonzo. Eliminating the transmission management tasks allows precious mental resources to be retasked to more critical functions. The day a Cycle World reader can find a flaw in Eric Bostrom’s logic will be worth celebrating.)

“now all we have to do is make the battery cheaper, stronger, lighter, and need less charging all the time. something nobody has been able to do yet. simple.” (All engineering tasks are complicated. If we as a society put 1/100th of the effort we waste on extending the ICE lifetime into battery and capacitor development, I might live to see EV turn mainstream. It’s all about focus and resources, something the Koch brothers haven’t redirected the half of our political system that they own toward.)

“I think the choice of electric bikes is a welcome addition to motorcycling. But I don't think replacing ICE bikes with e-bikes is a worthy goal. I would rather stop riding than be forced to ride an e-bike.” (Most likely, the overwhelming majority of society could care less if you stopped breathing, let alone riding. However, the Peak Oil moment is well behind us and the day recreational use of that resource is coming sooner than you think. Get over your “Mommy never loved me” bullshit and imagine a world where motorcycles are not the noisiest thing on the road.)

“Shifting gears and managing a bike's powerband is part of riding technique.... if eliminating facets of riding technique is the goal, ride a train.” (Ever watch MotoGP? Fly by wire eliminated all sorts of riding technique facets. Think you can ride any competitive bike better than Eric Bostrom? Right. Sure you can. Why not go back to suicide clutches, if you think complicating riding is valuable? Bet you miss having to manually add oil to the top end on the fly, too.)

Every sign on the horizon indicates motorcycling is a vanishing activity. Average rider age keeps heading for oblivion. Public opinion is at an all time low. Dealers are dying and consolidating. The only hope two wheeled transportation has for the future is in electrics. If these attitudes are representative of the majority of riders, the MIC can start kissing its ass goodbye.

I would never feel safe on a motorcycle that was silent.