After a moto-camping trip to Canada, I realized that my small bike luggage had a few faults. My Motofizz "camping seat bag" (reviewed in August 2008) is a great commuter packer, but it is far from watertight. Four days of rain in the morning and 100F+ muggy afternoons and my gear smelled like a boy's gym and made my skin crawl with bacteria when I went for a "fresh change." My 15 year old Eclipse P-38 saddle bags were pretty leaky when i bought them, but now they provide as much weather protection as a fishing net. It was time to step up to something more serious.

MMM has reviewed Giant Loop gear before (Giant Loop Great Basin Bag and Fandango Tank Bag, Winter 2010 the Giant Loop Saddlebag, June 2008) and  the consensus was always positive. So, I went for the whole shootin' match with the company's new Coyote Saddlebag and Dry Bag and the Diablo Tank Bag. If you've ever used canoe or kayaking dry bags, you're already familiar with the construction materials Giant Loop uses on this series of products. The shell of all three of these bags is made from Giant Loop's Bomb Shell™ “trucker’s tarp.” This is tough, waterproof stuff and the abrasion points at the bottom of the tank bag and the bottom and leading edge of the Coyote Saddlebag are reinforced with 1050 Nylon Ballistic Cordura™. The zippers are heavy duty and, the full length zipper on the Saddlebag and the Diablo are waterproof and protected by storm flaps. The Dry Bag seals up with a side-release buckle, canoe bag-style.

The Coyote Dry Bag neatly straps to either the front or back of the Saddlebag and is big enough for both my sleeping bag and the pad with extra space for camp shoes and light clothing. The Saddlebag is shipped with three really heavy duty "contoured" stuff sacks, including one that is pre-curved to fit  The stuff sacks and the full length zipper makes it possible to get to any of your gear without having to remove the stuff you don't need at the moment.

The Diablo has a rear divider for immediate stuff and a water-tight window that you feed from inside the bag through a zipper in the lid's mesh backing. This window setup is making me reconsider my Streetpilot GPS setup for the first time since 2004. You could use any battery-powered GPS protected inside this bag, including a multi-function phone; no need for a motorcycle-specific and over-priced waterproof unit. The bag unzips from the base to allow removal and incredibly easy access to the gas cap. This feature, alone, puts the Diablo in the stratosphere of  "best ever" tank bags. A 4-liter tank bag may seem too small for practical use, but there isn't much of a choice on a small dirt bike or sport bike. 8 1/4" x 12" isn't a lot of real estate, but it's enough for compact gear you need to get to in a hurry while still being able to maneuver your bike without steering-lock restriction.

In real-world use, this combination of gear is a giant improvement over my old rig. Packing light, I had a little room to spare after stuffing all of my camping gear and four days of clothing and snacks into the three bags. The first evening out, I was hammered with a monster downpour and my gear and clothing was as dry as when I packed it. I spent one night on a mid-August trip sleeping on a picnic table where I only used the gear stored in the Diablo and the Dry Bag for a short, marginally legal night's sleep. The convenience and access to my stuff, without having to load and unload everything I'd packed, allowed me to spend a night for free and stay off of the road when the hoofed rats came out when a planned campsite was closed due to flooding.

A deal, for me, with my WR's luggage, is the height and mounting restrictions. I'm old, inflexible, beat up, and short. My WR is young, nimble, and taller than me. My old camping rig often snagged a boot as I swung my leg over the tailbag and was inclined to send me and the bike crashing to the ground at particularly awkward moments. My Wolfman Enduro tankbag pushed my seat room back into the tailbag and saddlebags, which increased the odds that I'd land in a heap when getting on or off of the bike. One reason I ended up mounting the Dry Bag at the front of the Saddlebag is that kept the overall height of the rig low. That mounting position keeps the weight more centered, too.

As in any motorcycle packing situation, it's important to keep the weight as low and centered as possible. You want to pack the heavy stuff at the bottom of the Saddlebag and keep the weight evenly distributed. This probably isn't a big deal on a Triumph Thruxton, but on a 275 pound dirt bike, maneuvering through a twisty trail packed weight matters. When that weight is unstable, it's an even bigger deal. The attachment system Giant Loop uses on these three bags is flawlessly stable. It stays in place banging through rough terrain, in high winds and torrential rain, and for long distances.I will admit that the Coyote Saddlebag is a little weird looking, but it is exactly what I needed for my WR's touring rig and, altogether, this setup is better than my wildest dreams for my mini-touring bike.. 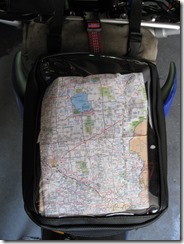 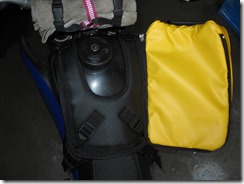 POSTSCRIPT: I have had my Giant Loop gear for three years, now. There isn't much more to say about the stuff except that is has worn incredibly well, is still water-tight, and the more I use it the more I like it. If you've followed my grumpy career, you know that is saying a lot. The zippers still work and are actually slightly easier to use than they were the day I loaded up the WR and headed out for my first weekend camping trip. Unbelievably, the map window on the Diablo is still crystal clear and it has seen almost 20,000 miles of use and abuse on the WR, including being strapped to the tank all last winter behind our RV.

I'm not ashamed to admit that the Dry Bag has seen use both on the WR and my V-Strom but in the canoe and kayak. It is an amazing product and has outlived two REI dry bags and survived dozens of canoe trips loaded with boating camping gear.

Nothing I can say will adequately describe how much I like the Coyote Saddlebag. It is simply the ultimate dirt bike camping bag. Nothing else even comes close.
Posted by T.W. Day

hello
thanks for this review.
I am on my way back from Morocco trails to France . I am looking for a new saddle to replace my old gear who turned out into pieces ( on rocks ) . Fortunately I could use an old rucksack put on en the seat as a solution for a moment . I had no s bag or tarp gear at this moment, send back by a 4WD .
I found out the coyote , which can carry almost everything . All reviews said the same .
But i will only use it 2 or 3 weeks a year : 2 days of driving for morocco with the trailer and the 400 DRZ on it or 200 km from home to spanish trails ( no need really there for camping and not so allowed as well).
So : do you think it is possible to fit the coyote on a roadster like the MV's brutale ( i dont care about the look at all, too old for this )
thanks
JLB former math( teacher

JLB, that's a tough question. The Coyote has a pretty skinny seat profile, well suited for the DRZ and my WR but I have never seen a Brutale so I can't guess what that bike is like. Giant Loop makes a larger saddlebag, the Great Basin (http://giantloopmoto.com/product/great-basin-saddlebag/). My bet would be that the larger bag would be a better fit on the MV.

thank you for answering Thomas .
The g basin will be too big for my drz ( or a brand new or old ktm if i go nuts again ) and , in fact, it is the main goal for the coyote !
I can always take my tank bag, full it up and take an army regular bag on the seat for the mv.
anyway i will test the coyote if i buy one .
s yours
JL B ( the name is Jean Luc )

Hi Thomas. Great article thank you. I will shortly be moving to the States to live (from Ireland). I hope to buy a light dual sport capable of mixed terrain riding. Most (all) of the ones I'm interested in run on tubes tires. In the bike pictured with the Coyote bag, your bike seems to be on tubless spoked. If so, can you tell me how you organised that. Thank you, Dino

Sorry, Dino. I'm running tubes on the WR. I've seen some good articles about fitting a spoked wheel for tubeless, but I haven't tried it out.