The next-to-the-last picture in the series above might give you an idea of how dry the driest state in the union, New Mexico, is. With 3% of the lake's capacity, more than 97% of this state park is sandy desert. Way more, since there was a fair amount of sandy beach and rocky hillsides even when the lake was a lake. So, the good news is if you show up with a street legal dirtbike, you have miles and miles of sandy, packed gravel, and rocky trails to ride with pretty much no one else in the park to bother. The state still, apparently, desperately wants to pretend this lake is coming back someday, so some of the "roads" are regularly graded. In fact, for most of the days we've been camped here there are more park employees, counting campground hosts, than there are park visitors and campers. Often, considerably more. For the most part, New Mexico is a red-state, so management skills are pretty low on the list of state competencies; along with education, poverty, average income, child well-being, and a variety of quality of life measures. From an out-state dirt biker's perspective, not much of that has a negative effect on riding in the state. (However, like most red states there are an excess of traffic cops in most cities, so watch your speed and obey signage carefully. New Mexico drivers are notoriously careless and reckless, another thing to be aware of.) 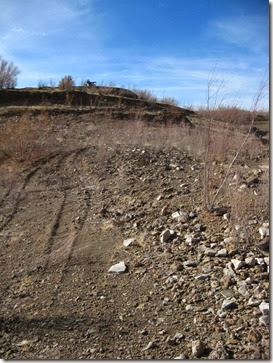 The other cool thing about the lake being water-free is that you can ride pretty much around the whole thing, skipping from one abandoned campsite or boat launch area to the next by interconnected trails. We are talking miles and, possibly, hundreds of miles of trails. I burned up a whole tank (3 gallons) of fuel and did 160 miles totally off-road yesterday, including playing hill climber for almost an hour in a rocky area near one of the world's most pointless dams. (Look way up at the top of the picture at left and you can see the outline of the world's coolest dual-purpose motorcycle.)

Sunday is supposed to be cool (45oF) and windy, so I will probably spend the day cleaning the bike, wrestling with my VW's electronic mess, and sucking up Aleve tablets until my joints quit aching. Tomorrow, it will be near 60oF and I'm gonna see if I can screw up some old man bones.

It is nice that you had all the off-road trails to yourself. Way better than racing around with a bunch of others.

'tis. I practically have the whole 36,000 acre park to myself. I am the only motorcycle out there on any given day for the last 3 weeks.

thinking about heading to this area in March. Do you still ride in the area? has much changed since you wrote this article? I like the idea of not many people and lots of miles of riding.

We were back in TorC last winter in February. Nothing had chanced at Elephant Butte since 2013: still not much water in the lake, very few campers in the park, and the only people taking advantage of all that sand to ride were 4-wheel drive pickups. Be sure you have a tire repair kit, the goatheads and mesquite will do a job on tires and tubes.

NM is a red state? Your nuts, the Legislative branch of NM has been blue since statehood in 1912! And the lake still has 7 miles of boating area when low. You do have a grudge. Too bad.

You need to get out of Santa Fe occasionally. You'd think NM would be a blue state, but it's more of a Blue Dog Democrat (or purple) state like most of the south. The state is littered with fracking sites, it's hard to find anything about the state's politics (outside of the hipster Santa Fe area) that qualifies as "liberal" or progressive, and the state's biggest export is its high school graduates.

This essay was written in 2013 when NASA had this to say about the "lake": https://earthobservatory.nasa.gov/IOTD/view.php?id=81714. "Numbers from the U.S. Army Corps of Engineers estimated the total water in storage to be 65,057 acre-feet (0.08 cubic kilometers) on July 24, 2013, about 3 percent of the reservoir’s capacity of 2.2 million acre-feet (2.7 cubic kilometers). The last time water levels were that low was 1972, after droughts in the 1950s and 1960s depleted Elephant Butte." There were absolutely no boats on the water for the entire 4 months we camped there. The marina only opened up for the Xmas party and we almost owned the campground that was closest to the lake. We often went for a week or more without another camper in our area. Don't know what it's like today. As I said, it was an awesome place for a dirt biker.