My wife is a big fan or horoscopes, particularly Rob Brezsny's column, "Free Will Astrology." Whenever I trip over a free magazine that has his column, I bring it home for her. Because I'm a habitual reader, I usually look at her horoscope and mine before I hand it over. If it were ever really bad news, I'd toss it. Brezsny seems to be disinclined toward predicting bad news, so I can’t remember ever failing in my delivery routine.

A week ago, when I was mired in Albuquerque’s RV repair hell, the opening line to my horoscope was, "You get tragedy where the tree, instead of bending, breaks," a quote from philosopher Ludwig Wittgenstein. The horoscope went on to describe how, due to my flexibility, in a few days I’d be looking back , wondering at how that capacity had turned bad fortune into good. I’m writing this from a beautiful campground in southern New Mexico, while we enjoy almost decent weather, and feel specially fortunate to have escaped last week’s booby traps and financial disasters. It was not all luck that got us here, but there was more than a fair share of good fortune that made the difference. 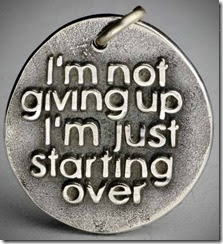 One of the factors in aging is the loss of elasticity. Kids are known for their flexibility and resilience. Old farts are known for being as fragile and brittle as Mr. Glass and as disinclined to bend as a piece of dried tumbleweed. The reason popular “wisdom” claims that people become conservative as they age is that it is true; old people are typically not particularly courageous. In fact, when someone over 50 acts with noticeable courage, it stands out as a particularly outrageous moment in history. As an example, Bertrand Russell and Benjamin Spock stood out as nearly lone examples of their (my parents’ and their parents’) generation when they protested the Vietnam War. Obviously, no courage was needed for the majority of those non-draft-able adults who hid their opinions and kept their heads down or, worse, went along with the Johnson and Nixon administrations’ claim that the war was necessary, ethical, and legal. Being “conservative” always means playing it safe. That is true on a macro and a micro-level.

After the 2nd “repair facility” (to use that phrase carelessly and grossly) claimed that I was an idiot and that I would not be able to get out of New Mexico without handing over $7,000-10,000 and gambling on the invisible talents of a collection of children and hillbillies, I was bent near the breaking point. Honestly, if I’d have had any faith that University VW or Hans Foreign Car Repair were competent to do the repairs for their quoted estimate, I might have gone for it. Since both places were incapable of troubleshooting the obvious electronic problem(s), that faith would have been unfounded. In freezing weather, with no place to work, limited tools, and a moving household to manage, I was on the edge of overwhelmed. Even after I found a competent shop, German Motowerkes, the job didn’t end until the last day. After all of that, it turned out that I should have had German Motowerkes do one more transmission fluid/filter change before we left town. Unfortunately, playing it “safe” is far too often a shortcut to being wrong.

I’ve had a couple of breaking-point injuries in my life; clavicle (3x), ribs (twice), fingers (4x), toes (5x), the grinding down of my mal-designed hip, and last year’s stopped-up heart. None of those events resulted in world-class “tragedy,” but the scar tissue on bone, vessel, or muscle/tendon is never as flexible or durable as the original materials. My conservative approach to riding on sand is closely knit to the number of times that sand has tossed me into space like a rag doll launched from a cannon. When I was young, mostly those events were comical and even a little fun. Now that I’m an official geezer, fun it ain’t.

There is a world of advice about bending without breaking:

All good words, but only some of that advice is useful some of the time. Bending is a lot harder, as a two-legged animal, than falling. It takes more strength, more flexibility, and better balance and all of those things deplete with age.

Technorati Tags: geezer with a grudge,aging,crashing
Posted by T.W. Day