Wrung out in Truth or Consequences 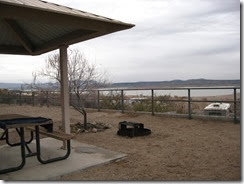 We’re mobile, sort of, again. I’m writing this from Campsite 66 at Elephant Butte State Park about 200 miles south of Albuquerque.  As you can see, at left, the view from our “home” is pretty spectacular. We got here about noon and, after an hour of panic when we discovered our water system was iced up and that Robbye’s having left the shower drain pump on for an undetermined time had fried the pump’s seals, we settled into our old routines. Tomorrow, Thursday, is supposed to be wet, chilly (around 45F), and relaxing. We are going nowhere if nowhere is the most comfortable place to be. I paid for a week at this site, but I might add a week if we decide we like it here.

The campground is about 15 minutes from Truth or Consequences. That puts us within striking (by our ever-reliable WR250X) distance of groceries, shopping, and HOT SPRINGS! After Thursday, the weather report is for clear, reasonably warm,

Monday was a confusing combination of painful, stressful, and heartening. When I last talked to Ricardo (Ric) of German Motowerkes on Friday, it sounded like we were ready to hit the road. We were too far from their shop to make it before they closed at noon, so I asked him to do an oil change and we’d pick up the RV Monday morning. We were staying with friends in Santa Fe and decided to try to pretend we were confident about Monday’s outcome for two days.

We got to German Motowerkes a little after their opening time and discovered they hadn’t got to the oil change yet. The owner, Ricardo (Ric) said they’d drive the RV several times and it seemed to be working. They wouldn’t be able to get to the oil change until later that afternoon. After breakfast, I decided to do a test drive myself. I went back and caught Ric in the driveway, asked him if it was ok for me to drive it for a bit while it was in the queue, he just asked “Do you have keys?” and went back to work. OI assumed he want me to pay for the work, so far, or to leave a credit card, or something, but . . . we know it’s not my honest face. I took off, uphill, toward Santa Fe, for the first 14 miles, it looked like we were in business. As I drove up I25, my brand new Scangauge II started to tell a different story. In the beginning, the transmission temperature was 140F, which indicated that the German Motowerkes guys had been driving the unit that morning. For 14 miles it ran about 170F-180F, slightly higher than before all of the VW craptrain began hailing on us, but within specs. At the beginning of the uphill grade toward Santa Fe, the transmission temperature began to head toward 200F, then it ramped up quickly to 250F and the transmission began to do it’s torque converter shifting dance. I was trapped on the freeway for about a mile before I could exit and get the RV parked.

This was a brand new problem, I thought. With no idea of where to go next, I waited for more than an hour to let the transmission temperature drop below 200F and started back toward German Motowerkes under 40mph in fixed gears. For a couple of miles, the temperature stayed high, but when I was about to decide a transmission overhaul was in my future, the temperature suddenly dropped to 170F and stayed there for the last 10 miles back to the shop. WTF, as the illiterate masses tend to text.

He agreed that was the only thing that made sense and we planned to pick up the RV Tuesday morning. Here’s where the “heartening” part of this story appears. We had clearly worn out our welcome in Santa Fe, so our options were limited for the night. With a dog, motels are sketchy. Without burned out attitudes, even looking for a motel was going to be a stretch. We decided to head back to our friends in Belen, load up our gear, sleep in the car, and be outside of German Motowerkes at 7:30AM sharp. When we arrived at our friends’ home, Pat greeted us with “Welcome home! I knew things weren’t going well when you both came in one car.” I was so tired and discouraged that I was close to tears. She wouldn’t have us staying in the car but put us right back in the room where we’d stayed for more than a week. I wanted to resist, but I didn’t have the energy. I do not know what we have done to deserve such precious new friends, but I am eternally thankful. Pat and Jeff Sullivan went so far beyond anything reasonable that I don’t even know how to start thanking them.

Tuesday morning, we picked up the RV, sans transmission bypass and with fresh engine oil, on Tuesday morning. I was stunned to see the bill; $274. Instead of a $7,500, suspect-rebuilt transmission, with the electronic problems that caused the failure still intact, I had a bill that barely amounted to an oil change. (This article, Eurovan Automatic Transaxles: The Whole Story, nicely details the problem with VW’s electronics when the article states, “We have experienced situations where a fresh transaxle either does not work properly upon install, or is ruined in short order by a faulty control unit.”) On top of that, when I talked to the tech at Gowesty (the source of this article), he stated in no uncertain terms that VW transmissions are unreliable crap and that their electronics were as buggy as a Tijuana hotel. This guy’s company makes a good bit of their living servicing this junk! On top of that, Gowesty’s advice to “Always try a NEW control unit to correct a transaxle problem BEFORE replacing the transaxle.” is disingenuous, at best, because that tech told me that VW no longer provides the ECU part.

With all that as background, we carefully drove around Albuquerque with one eye on the Scangauge II. So far, so good. I found a Harbor Freight and bought a siphon to do a transmission fluid change on the road. We hit I25 on the way back to Belen to pick up the bike trailer and our stuff. Still, no problems. The transmission temperature was slightly higher than I’d expect for the ambient temperature, but not grossly so. 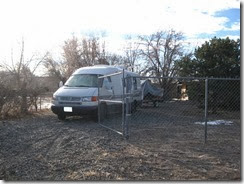 We got to the Sullivan’s about 1PM and, probably based on our trashed appearance, Pat insisted that we stay over and leave in the morning. We tried to be sociable, but I had been surviving on no more than 3 hours sleep a night for almost two weeks and Robbye wasn’t in much better shape. I managed to get the trailer loaded up and moved the RV to the start gate before dark and, again, we rudely crashed at a children’s hour after dinner.

Early Wednesday, as Jeff was getting his clothes for work, he said, “Well, since you’re going south, you can’' always ‘come back home’ if something goes wrong.” We’d been with them so long they had begun to call their home ours. How do you repay that kind of debt?

We’re in our little RV for the week, but we will always think of that house in Belen as one of the places we’ve called “home” and of the Sullivans as part of our family.