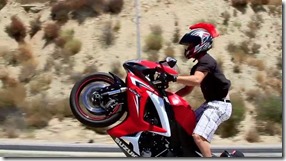 The May issue of Motorcyclist had a brief review of the new Honda 500 twins with the lead-in, “Honda’s new CTX twins are made for newbies.” The article was slightly less stupid than the intro, but the conclusion Motorcyclist made of Honda’s analysis was very old school (read “stupid”): “American Honda’s market research shows new riders increasingly prioritize function and economy above all else.” See what I mean? What Motorcyclist calls “new riders” a smart person would call smart people. The old school, even if they are young and dumb, motorcyclists are all about lifestyle bullshit and phony image. In their own tiny minds, they think they look cool. In reality, they look like goofy kids playing at being brainless old guys. 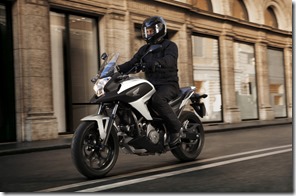 Honda has identified, once again, a more realistic market and rider. These “function and economy” driven riders are the future, if motorcycling is going to exist on public roads in the future. This is the kind of rider that Ride to Work Day targets. This is the kind of rider who will bring some respect to motorcyclists and motorcycling as a transportation system. This kind of rider shops by specifications that the old school clowns can’t even identify: mpg, reliability, maintenance schedules, warranty, available service facilities, long distance comfort, total width (for lane-splitting), and a complicated collection of rideability factors.

Horsepower, the old claim-to-motorcycle-fame is useless if it is delivered in a package that is less efficient than an SUV. All of the smart kids see $10-gallon gas in their future. You won’t be able to give away a 15-40mpg motorcycle if it costs $40 to fill the tank and you have to do that again ninety miles later. I know guys who brag about owning motorcycles that get worse mileage than my motorhome. The best nod I can give them is the same head-shake that reflexively comes when I see someone smacking their nuts on a handrail when their skateboard stunt goes bad. (“Dude, you aren’t close to being good enough to be a racer and you aren’t rich enough to keep dumping money into that two-wheeled boat for more than a couple of years. You think you’re a motorcyclist, but you’re barely a poser. In two years, you’ll either be dead or back in Mom’s car and living in her basement.”)

Honda is betting on a motorcycling future. Harley, Polaris, and the rest of the old school fools are betting that you aren’t smart enough to see the future.

Good post. I'd like to think that new riders are conscience about mpg and the like but by the number of students that hubby has mentioned to me say they want a litre bike as their first bike I am not so sure..... "facepalm"

It is sad when it takes more petrol to fill the bike now than it used to to fill my car 10 years ago.

I was going to comment on you bias towards Honda being the only sensible and "smart" purchase, but saw the line above the article about arguing with a fool....must be your way of saying it would be useless to point out you flawed logic.

On a related note, I was happy to read that the new chair of the AMA rides a Kawasaki Ninja 500 and declares it one of the most fun motorcycles she's owned. Maybe it's me, but I seem to see a lot more smiles on people riding smaller, more practical bikes, while the whalecycle crowd grimaces its way down the open road.

You misread me. I'm saying that buying low efficiency motorcycle is an economic mistake. I'd love to know where you thought you read Honda is "the only sensible and "smart" purchase." I do think anything less than 50mpg from a motorcycle is freakin' stupid.

Even my CX500c (same one as I posted a while back on your post about "custom" bikes) kind of annoys me since it only gets 55mpg. My old VT500C got 60+ if I didn't flog it but I hated the cruiser style too much and it in too good shape to make hacking it apart worth it.

I've been looking around for a cheap (REALLY cheap) titled 250-350 DS bike in junky-but-complete condition... they're sort of rare in my area unfortunately.

Every day I swing a leg over my WR250X, I think I'm a new rider. The more I ride it, the more I realize I have to learn about riding it. DS bikes hang on to value longer than any other style I know of. They are cheaper new but don't depreciate a lot, even in trashed condition. I sold my 2000 Kawasaki KL250 for $1800 with 22,000 miles on the odometer. The upside is, you won't lose a lot when you sell it.