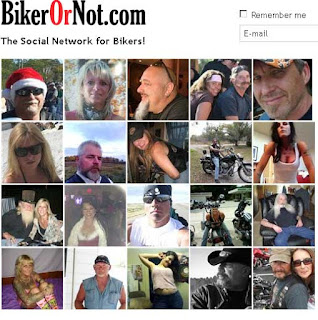 You gotta love the ads that pop up on a Google blog site. Today's laugh is BikerOrNot.com, "A Social Network for Bikers" Please, follow that link for me and let me know what kinda crap I'm selling this week. 'Cause if you know me you know I'm all about social networking. Especially social networking that ends with an exclamation mark! (Like that one.) I snagged a screenshot of the sort of "networking" this fine organization promotes and (surprise!) the networkers appear to be a collection of geezers, bimbos, Village People, pirates, cowboys, hookers, and one Santa Claus impersonator.

This week I planned on being a little social. A bunch of old guys hang out together for breakfast on Saturdays and I really enjoyed their company a few weeks back. Between then and yesterday I enjoyed the company of a collection of doctors and nurses and got a new piece of stainless steel in my chest for their efforts and my discomfort. It sucks not being able to show off hardware that is that expensive, but there you go. But, life jumped in and tangled up my weekend. Maybe I'll be social next weekend.

Anyway, just for laughs and because we have 6" of snow in the driveway and rising, I clicked on a couple of the characters pictures for their whateveryoucallit. Guess who is who? (No, I am not making this shit up.)

jddman2001
Male, 55 years old, and in a relationship. Birthday is June 28, 1957. Owns and rides a motorcycle. Interested in females. Looking for riding partners or friends. Drinks socially. Lives in Burlington, Kentucky United States. Member since December 2008.

Fast Rat
Male, and single. Backseat available. Owns and rides a motorcycle. Interested in females. Looking for friends, riding partners, or a relationship. Religious view is I am my own Pope. Drinks socially. Libertarian political views. Lives in Madison, New Jersey
Posted by T.W. Day at Sunday, December 09, 2012

Hope you are feeling better after seeing all those doctors.

Thanks for the chuckle with those ads/descriptions. One can only hope they are fake and for entertainment purposes only, lol.