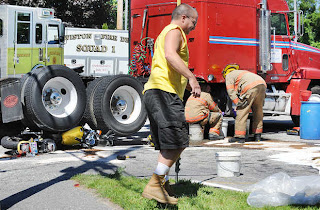 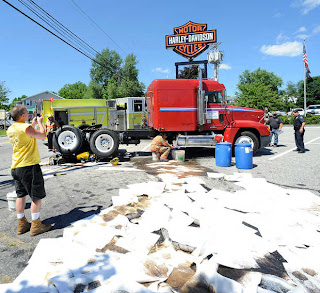 Sadly, a woman on a HD was run over and killed by a dump truck near here recently. In a very busy area apparently she pulled out of a gas station and squeezed in front of the truck stopped at a traffic light. He couldn't see her over the hood (so he claims) and when he accelerated he ran right over her.

In the Twin Cities a few years back, a semi driver connected with a small car on the freeway, pushing it along in front of the truck, grinding up tires and metal, until some other drivers surrounded him and forced him to a stop. He also didn't know he'd run over a car. Most likely, on speed and babbling on a cell phone; the two favorite things of truckers across the nation.

In the MSF class, the literature pictures a truck's "no zone" (I have no idea where that baby talk comes from.) that highlights the huge area of invisibility we all "enjoy" from truckers. They can't see squat in those things and have no more business on regular traffic roads than airliners and cruise ships.

Sadly most people will never have the perspective of operating the smallest or largest vehicles on the road. Our woefully inadequate licensing and training systems in this country do not prepare you very well for what's out there.
I had a friend who drove in town deliveries in a semi (pre cell phone days) and the stories he told of absolute driver stupidity were both horrifying and hilarious.

It's all about making sure every consumer can spend our money on the vehicle of choice. Safety isn't even in the top 10 concerns. Same goes for cell phones and driving. Follow the money.

I have some helmet cam video of truck drivers that demonstrates how little those characters know or care about safe following distance. You'd think they imagine they can stop on a dime, or they don't care who they kill. Personally, I think truck taxes and fuel should go to fund highways specifically for truck traffic and the damn things should be banned from Interstates and most city streets. Opting for truck transportation over rail was one of the dumbest decisions this country ever made and the fuel inefficiency is a massively hidden cost. As is the roadway repair costs due to damage from large trucks.

And that's how I really feel about that.

This isn't strictly related, but I came across the "advice" blog of a slightly more intelligent cruiser-looser.
I think you might be entertained by the gems espoused there. Here's a sample (dealing with moto choice):
"Sports Bike or Cruiser?

The safest motorcycle is the cruiser. It does not need to be a Harley, just a cruiser.

To put it into perspective, the "Super Sports Bike" is four times as likely to be involved in an accident than a cruiser."
http://www.motorcycleriderbasics.com/omg-my-husband-wants-a-motorcycle/
Regards,
HyperB

PS. So help me the FSM, this individual published a book titled "Motorcycle Rider Basics" !!!

Un-fucking believable. Must be a failed investment banker who is so used to making up numbers he's unable to generate statistics any other way. This is what happens when society goes completely overboard with making every aspect of human activity available to the handicapped. There are some things brain-dead people should not be allowed to do.

I just looked at the guys site. Tom, you would just love this guy, he is the antithesis of you and your attitudes.
One of his 10 riding rules is never use the front brake below 5mph. He is totally in favor of loud pipes, doesn't like Sportsters because the seat is too high and they don't weigh enough!
On the other hand he advocates taking the MSF class and is a proponent of ATGATT, and proper riding tactics. Very strange...

After the MSF BRC II day I had yesterday, I'm sure I'd recognize him. AGAT means assless chaps, a pudding cup, finger-less gloves, and high-heeled Harley boots to these characters. Riding on a rainy day is "crazy." Getting outside of your home county is "an adventure." Taking an MSF class means an opportunity to lecture the instructor about how dangerous helmets are in some situations.

You should have been in my class yesterday when a female version of this guy asked how I reconcile my "following distance" rules with the peer pressure in group riding formation? I called that practice "rolling bowling pins" and said there is no chance I'd be interested in participating in something that stupid. And on it went.