Fixing A Hole in My GIVI Cases

At the end of that long weekend of motorcycle classes, as I was packing up to call it a day and loading up my gear, I snapped off the key to my GIVI bags in one of my side cases. I always have a pair of small bungee cords on the cases, so I used them to hold the thing shut till I got home. I figured I'd be able to get the busted key out of the lock, if I got it all disassembled, but I couldn't budge the thing. My next great idea was to take the lock mechanism to a locksmith. Before doing that, I did a Google search on "givi lock repair" and discovered the locks are available and cheap; 3 locks, six keys, for $30. I checked with my local GIVI dealer, Midwest Cycle Supply, and they had the parts I needed. Road trip for the WR! 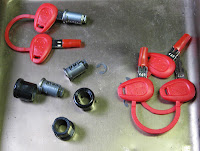 A bit later, I had the stuff I needed. I disassembled the busted case lock, first. That left the good one to use as a model for reassembly. It doesn't take much to get the lock out of the case, something to consider when you imagine a plastic case offers some kind of security. They don't. I accidentally "locked" the broken case, thinking I was going to set the mechanism free. All it took was a flat screwdriver and some wrist torque and the lock popped open; just like it would if a thief decided to empty my luggage on the road. 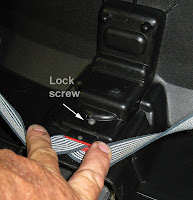 Once I had the case off of the bike, the first step is to remove the lock screw. This one screw holds the entire latch and lock mechanism in place.: one #8 by 1/2" Phillips screw between the world and all of my stuff. GIVI, security is not thy name. The screw out, the lock comes loose and you're ready to disassemble. 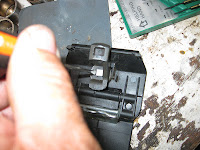 Dis-assembly is easy, too. One e-clip holds the lock and latch in place. Pop that with a flat screwdriver and the latch comes apart easily. 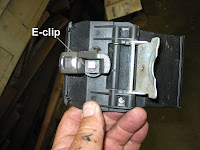 Once you have the latch apart, you're ready to reassemble with the new pieces.

The new key lock goes into a plastic surround. 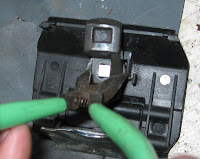 The surround pushes into the latch assembly.

The latch assembly is held together with the e-clip. That is most easily re-installed with a pair of needle nose pliers. 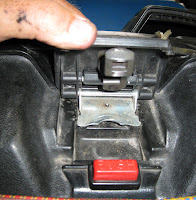 Once the clip is in place, slide the latch mechanism back on the case. 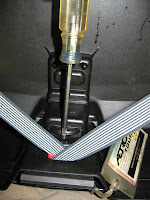 Tighten the Phillips screw to hold it all together. 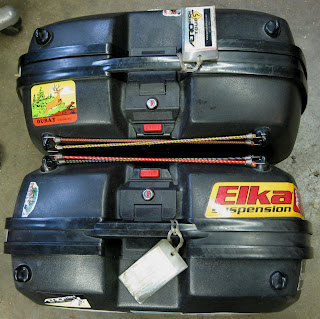 In my case, do it two more times so that all three of my GIVI cases use the same key and I'm set to go another 50,000 miles with this luggage. The fact is, it's probably a good thing I didn't think about how fragile my "security" has been with these cases and it's a good thing that I know that now. I'll probably buy some bicycle cables to lock around the cases, when I'm away from them from here out.
Posted by T.W. Day at Monday, July 23, 2012

As far as I understand locks they serve two purposes 1. peace of mind and 2. to keep kids and roving drunks from rummaging through your stuff. I nearly fell off my couch laughing when watching an episode of Top Gear (UK) and they set 'thieves' on cars. The 'sophisticated' tools they had to steal the cars were hammers and flathead screwdrivers. If you WANT to steal something, it's about as easy as a freshman at a kegger.

It only takes an experience repairing a lock to prove your point.

Might be easier and more secure to just add a stainless steel hasp and padlock to each bag, but it wouldn't look as neat. Locks are never there to stop the professional thief (which they can't do), just to make them move on to an easier target.

Secured locks are very important to any vehicle, especially a motorbike.
You always think about the security if travelling in long distance. Thanks for posting your experience in your GIVI cases.

This article gives the light in which we can observe the reality. This is very nice one and gives in-depth information. Thanks for this nice article.