Riders' Digest: Another Word from the UK 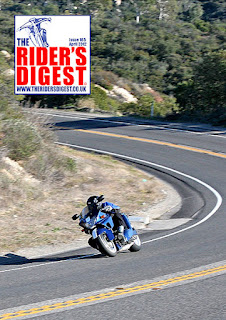 Here is a rare opportunity to get to read a pretty decent publication for nothing. Paul Compton sent a link to the new on-line Riders' Digest so I could look at an article called "A Labrador Called Harley," but the whole magazine was pretty interesting.

For example, on page 71 there is an article titled "Group Riding: What's the Story?" with which I disagreed on every point made and where the "statistics" used would have made Mark Twain perfectly satisfied with his conclusion ("There are three kinds of lies: lies, damned lies, and statistics."). Similar to the argument Keith Code made a few years back regarding the safety embedded in liter bikes over smaller machines, the author finds comfort in numbers and conclusions that a Republican economist might avoid.The statement "The group ride is a relatively new and fast growing area of motorcycle culture," is so blatantly stupid that I practically put my fist through the computer screen when I read that bit of foolishness. Group riding has been around, especially in the biker gangster crowd, since the 1950's, at least. Sixty years is "relatively new" by who's standards? The author, Heidi Bailey, sites her sources as "a new study conducted earlier this year with the
help of over 1200 bikers of all shapes and sizes has started to examine the issue," but never bothers to identify that "study." She has that in common with Keith Code who also claims that training improved motorcyclists' mortality statistics, but never worries about showing evidence of that claim. However, mine is just one point of view and her's is probably more the majority view of safety in numbers or whatever the justification behind trains of motorcycles may be.

Paul's recommended article contained a quote that I may use for the rest of my life, ". . . Essentially, every new Harley is an old bike. Old engine, old frame, old idea. That’s what the customers want." Damn, I wish I'd written that. The author, only identified as "Oldlongdog," kills his topic. Another line that came close to home was, "To a biker a Harley is a bike; to the uninitiated wannabe a bike is a Harley." Paul is right, I loved every paragraph of the column and will bookmark the magazine for regular reading. I wish I knew who Oldlongdog is, I'd look for his writing, too.

The dog-portion of the Harley-Lab article reminded me of a joke I heard from an old guy in Nova Scotia, "What does a Labrador dog and a Harley have in common? They both like to ride in the back of pickup trucks and drool." The funny part of that joke, for me, was the fact that in Nova Scotia, a "Labrador dog" was not a breed of dog, but dog from Labrador.

It's tax time in the US, so my recreational reading is limited to fiction that will take my mind off of my difficulties by focusing on my favorite fictional philosophy, "killin' people who need killin'." That's a Bill Hickok quote, but  I think it still applies to most of modern culture. However, I'm going to keep working my way through the Digest because it's one of the most interesting magazines I've read in years.
Posted by T.W. Day

Hi Geez (as they say on the UK club scene),
I’m the editor of The Rider’s Digest so it was good to read that you found it interesting. Thank you for the recommendation.
I was pleased to hear that you enjoyed Oldlongdog’s article but I was appalled to read that our ever so lovely Heidi had almost driven you to violence so I felt I should offer a few words in her defence. I’ll kick-off with the statement that almost caused you to lash out and come back to her damned lies and statistics.
Rather than showing up her ignorance, Ms B’s assertion that group riding is a "relatively new" phenomenon actually revealed TRD’s ‘provincial’ origins as a UK based magazine and my lack of imagination as editor for not realising how quickly an online version can go international and adjusting or qualifying the content accordingly!
Although group riding was indeed popular with the One Percenters on your side of the pond by the middle of the last century, I can honestly say that I’d never come across it in Olde England by 1978 and consequently I was amazed when I witnessed clusters of riders all over New England when I was visiting in the early fall of that year! It’s difficult to say when group riding first became popular over here but it can only really be in the last ten or fifteen years, which when you’re my age (and Heidi’s not a hell of a lot younger) counts as pretty damn recent!
As for the study she refers to; she didn’t identify it because it hasn’t been published yet. However, the reason she has the inside line on the data is because it is her own paper (for her Masters in Traffic Behaviour at Cranfield University www.cranfield.ac.uk ); and the reason she received 1,200 answers to her questionnaire (which is a massive response for a piece of academic research on motorcycling in the UK) is because she had been writing her own brand of intelligent, entertaining and above all informative articles in TRD (under her nom de plume of Lois Fast-Lane) ever since 1999 and therefore there were loads of readers who were more than happy to oblige.
I will try to get you a copy of Heidi’s treatise for your perusal whenever it’s released for public consumption (incidentally, personally I’ve always subscribed to the view that statistics are like a bikini: what they show is very interesting but the things they cover are absolutely crucial!)
Thanks again for your generous words, I hope my response doesn’t make me sound too much like an over-protective mother hen!
Dave Gurman

Thanks for filling in the blanks. My bark is more energetic than my bite and I'm miles from violence. Intolerance, maybe, but violence, no.

I've been avoiding group street riders for most of my life, the 1% variety and everyone else. It's possible that the UK variety are more sane, less anti-social, and more attractive. I wouldn't put my money on it, though. I am suspicious of the conclusions drawn from volunteer surveys. I've run a few in my career and they are easily designed to extract an expected response and highly unscientific. I'm with you on the missing bits in statistical analysis.

I absolutely enjoyed your magazine and highly recommend it to anyone looking for a motorcycle reading fix. I'm going to keep an eye on you folks.

So, the problem is that they got caught, not the fact that their so-called magazine publishes idiotic drivel.
I guess, in the "provinces" truth is whatever you can get away with.
-Hyper

Just a quick note to let you know that issue 165 of The Rider's Digest is available for download now.

Be sure to let me know what you think.

Great magazine, Dave. You guys have some pretty spectacular programmers on staff, too. The website is more professional than about 90% of the high end gloss magazines.

The riders digest describes very well the UK related riding experiences. You have shared it for our information