I sent MMM's editors an article suggestion a few weeks back, "I think it would be cool to do an article about reviewing motorcycles with everyone putting in their two cents about the experience. Since hardly any of us like reviewing cruisers, that would be a principle part of the article; why we hate reviewing cruisers from everyone's point of view. On the plus side, everyone could talk about what they'd like to review and why." The editors resisted my "why we hate reviewing cruisers" suggestion for obvious (advertisers and money) reasons, but they were somewhat open to "a story on the challenges about trying to rude/write/review objectively." I think that's an interesting article, but I like my original idea better. So, I'm going to do it here. 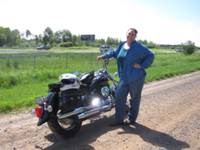 The hard fact is most motorcyclists dislike incompetent engineering. Bikers will ride any damn thing they think makes them look cool, but motorcyclists just want to go somewhere on two wheels with as little pain as possible and as much fun as they can stand. Fun is not a component of riding a cruiser. The damn things are just too awkward to even be considered motorcycles, let alone competent motorcycles. They are style-before-function toys and, as such, leave a lot to be desired in the riding-somewhere department. Currently, MMM has two people on staff who enjoy a day in a gynecologist's chair; editor Bruce Mike and new writer Michelle Moe. In a more rational world, that would set the magazine up for all of the cruiser reviews anyone should ever want to read. But there is a perverted strain in humans that insists everyone take a turn in the torture chamber. Hence, my two turns on cruiser crap.

An even odder fact about some of us at MMM is that we aren't all poor, young, starving writers desperate to hang on to our writing gigs. MMM doesn't pay squat for the written word and most of us are doing what we do for the magazine because it's fun. Opposed to the glossy magazine writers who are scratching out a living writing about motorcycles and desperately aware that practically everyone on the planet and on two wheels can do that job as well as they are doing it. To get some of us to review a motorcycle, it has to be worth messing with. For example, me. I have a 2004 Suzuki V-Strom 650 and a 2008 WR250X Yamaha. Nothing special there, but those two bikes do almost everything I can imagine wanting to do on a motorcycle. In fact, the only bikes I can imagine stuffing in the corner of my garage with the current two would be a relatively modern trials bike or the Zero DS. Otherwise, nothing made or imported into the US is as fun to ride as what I already own. That makes me less than excited about blowing a day or two on a motorcycle that I wouldn't own if I didn't have any motorcycles.

My lessened excitement level does a couple of things to and for the reader. Unlike those desperate kids, I say what I think not what the bike supplier wants me to say (and think). If I don't like a bike, I say so. Sometimes the magazine chooses not to publish what I say but I still said it and most readers find the hints of the bits that were cut in what's left. My general lack of enthusiasm for the Holy Grail of Motorcycling can be a downer for kids who desperately need a cheerleader. I played football. I was not a football cheerleader (like G.W. Bush or the other Texas nancyboy Perry). I don't do cheers for anyone or anything, except my kids.

Every once in a while, I get to ride something I like and when I like it I say it. The Honda CBR250R in the current issue, the Kawasaki Versys, the Suzuki Gladius, both of the KLR650 (2002 & 2008) models I reviewed, and the 650 V-Strom that I liked so much I bought one. The reviews that have attracted even more attention are the reviews that didn't make it into MMM but ended up here and on my website like the Suzuki TU250X. I'm really unfiltered on my own blog.