Maybe Not the End?

Early Wednesday morning, I got an email from Andy Goldfine with the subject line, “certain I am a geezer now.” Andy was mostly commenting on how modern motorcycles are “too pointy” and not cosmetically to his tastes. My reply was that not only are the cosmetically weird looking, but they are too tall and wide, too heavy, insanely powerful, incredibly fuel inefficient, too cluttered, and not particularly fun to ride. I whined that now that my eyesight seems to be somewhat stabilized I’ve been looking for a Suzuki TU250X for the last two-and-a-half years without any luck. Even the state’s MSF program can’t get them and used bikes often list for pretty much what a new bike sells for.

Not an hour from writing that response, my Craig’s List search sent me an email notifying me that a 2012 TU250X was available for $2600 “practically brand new with 700 miles on it and not a scratch on it.” Suddenly, it was put up or shut up time. I emailed the seller, got a little more information, loaded up my ramps and tie-downs, collected my gear and $2600 cash, and with an address somewhere west of Rochester I was headed south just after noon. On the way to the buyer’s location, I thought of all the things I did NOT want to suffer again in a used motorcycle: #1 no damn kids, #2 check for the existence of an air filter, #3 no modified or aftermarket exhaust or intake systems, look at the drive sprocket to be sure it hasn’t been mangled or the countershaft retaining nut, and crash damage. I made a mental list during my hour drive and checked it a dozen times. Any one of those items and I planned on thanking the seller for his time and driving back home without a quibble. I’ve dealt with all of that shit before and I don’t have the patience or tolerance to do it ever again.

You’ve probably heard the used car salesman line “it was driven by a little old lady only on Sundays to and from church?” This motorcycle was owned by a 60-something Mayo Clinic anesthesiologist who (seriously) only used the TU250X to drive from his house down his very long driveway to get his mail. His “real motorcycle” is a very new Goldwing. There are 700 miles on the TU’s odometer: brand new looking everything and not a scratch on it. It even has a heated vest Quiconnect2 12VDC cable already hooked up for my heated vests. The owner generously let me look for all of the fatal flaws on my list and even helped me push the bike up my ramp on to my pickup. The whole transaction probably took 20 minutes from when I drove into his driveway until I rolled back out on to the street. 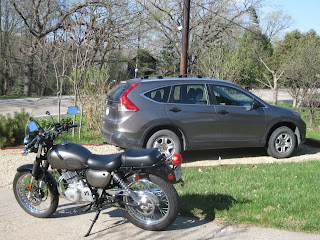 My wife is sort of, let’s say, neutral about my new bike. When myasthenia gravis took away my vision three years ago, she was of two minds: #1 at least I won’t have to worry about you when you are one one of your long motorcycle trips and #2 just when you are getting comfortable with retirement you can’t do the things you love anymore. So, now that the vision thing appears to be under control and the bike I’ve been looking for suddenly appeared, #1 is suddenly back in her life again. The Honda CR-V in the picture at left is her new vehicle (new to us, anyway) as of a couple of weeks ago. She has big plans for us to travel and even “camp” in that little SUV and I know she worries that the motorcycle could put a damper on those dreams. I will try not to disappoint her . . . too severely.

A little while back, I wrote “What Really Signals the End?” That essay mostly moaned about the trauma of making the decision to sell my Aerostich and Giant Loop gear. It was premature. I’ve waffled about putting that stuff up for sale since last fall and it is all still hanging in my closet. I did give away some stuff to friends and had plans on giving away a lot more stuff. But the two Darien suits are still there, my HGC and Shoei helmets are still hanging from the rack, and my beloved Gaerne boots are still in the closet. Hell, I didn’t even get around to putting my barely-used ICON Patrol boots up for sale, although I did try fairly hard to give them to someone locally.

So, we’ll see where this all takes me this summer. I’m old, so all of my systems are on the verge of failing and I’ve already experienced a pretty severe system crash. It won’t break my heart if I can’t pass my own baseline test. I haven’t taught an MSF class in two years and the last time I tried to ride my WR250X through the BRC course I couldn’t see the lines or stay inside the box, thanks to double-vision and myasthenia gravis. So, the first thing I’m going to do, once I get the bike insured, is ride over to the local college parking lot and run myself through that series of exercises. If I don’t ace it, this experiment will come to an abrupt end. Stay tuned.