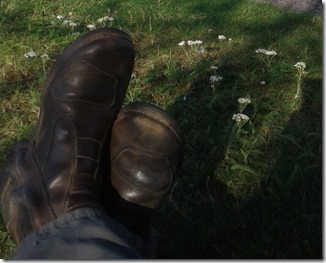 There is no point in my making a serious attempt at identifying these boots. Gaerne doesn’t make anything like them anymore. I bought them sometime around 1995 from Ryan Young’s booth at one of the US Observed Trials meets in Colorado. Mostly, Young’s gear was all about Observed Trials, but he had a fair line of Gaerne boots and a little street gear and these boots were in that lot. 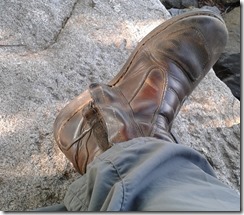 To say the least, they have seen a lot of use. For starters, I liked them because of their extreme riding and walking comfort, replaceable soles, good (if not great) protection, and the look. I wore these boots under suit pants during my medical device career and never heard a word about their appearance. Of course, I did clean, wax, and polish them a lot more often back then. Since 2001, their only maintenance has been irrecular cleaning and an occasional dose of Nikwax leather treatment. 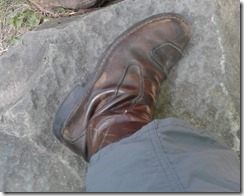 They weren’t cheap, around $200. I’ve worn out and replaced 3 1/2 sets of Vibram soles and the zippers were replaced about 15 years ago. You can see by the picture (above) that the Velcro alignment isn’t great since the zipper repair. No problem, they still don’t leak. I wore out the original insoles pretty quickly, hiking and riding off-pavement in Colorado. I can’t guess how many replacements I’ve burned up in that category.

There is really no good reason for this review, other than me wanting to recognize a great product that I have owned and used for almost a generation. I have two other pairs of motorcycle boots, but I don’t often wear them. In fact, the Gaernes are the only boots waiting downstair by the rest of my gear. I might was well admit I wasted money with the other boots and get rid of them. I’ve worn these boots back and forth from Colorado and Minnesota to California a half-dozen times, to Alaska in 24 days of almost constant rain, to Nova Scotia and the heaviest rain storm I’ve ever experienced under any conditions, all over North Dakota and most of the Midwest, and in wind, rain, and even snow around my homes in the Cities and Red Wing. I don’t think it is possible to wear them out. I won’t live that long.

Email ThisBlogThis!Share to TwitterShare to FacebookShare to Pinterest
Labels: all the gear all the time, boots, gear, product review, protective gear, riding gear