Wandering Down to Davenport

Back in early August, a friend wrote me, “Hey are you going to be back from Canada Labor Day weekend? I'm looking for a buddy to ride to Davenport Vintage Meet. Ride down Friday in time for the races, hang out Sat/swap meet, ride back Sunday with a ferry ride & a crazy Catholic church chicken dinner on the way.” Do not ask me why, but I said “Assuming no catastrophes or old age shit, I should be good for that.” And I put the ride on my calendar for the first weekend in September. I didn’t even look up the details about the “event” until a few days before we were set to go. I had delusions of seeing something like the old Steamboat Springs Vintage Motorcycle Week. Not a chance in hell. 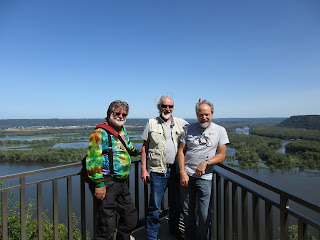 After an auspicious beginning, “The Easy Way or My Way,” prep session, the actual trip was anticlimactic. The ride between Red Wing and Davenport was way cooler than I’d expected. I haven’t really explored much of southeast Minnesota, other than the ride back from Cincinnati when I bought my V-Strom in 2007. Cal did a masterful job as tour director. There were fewer than 75 boring miles (one-way) in the whole trip, most of which came at the end near Davenport. 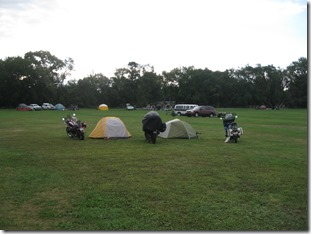 Davenport, on the other hand, is a typical Midwestern town with typically boring fairgrounds: home of the Mississippi Valley Fairgound also home of the Davenport Vintage thing. This would also be our “campground.” Over the years, I have camped in some really stupid places: ditches, corn and wheat fields, hanging from trees, shouldering my way on to rocks, on picnic tables and park benches, beside highways and freeways, and in KOAs and worse. This place was close to the worst. We ended up setting up camp in two places: 1) Cal and Tim in the middle of a parking lot where they both had sworn they would never camp again and 2) me next to a gazebo and some metal park benches where I could hang my hammock. Later, I discovered two things about my far more prime site than Cal and Tim’s, 1) I was surrounded by the loudest, scariest snoring sounds emitted by biological beings (assuming old men are biological beings) and 2) everywhere but where I entered the area my campsite was labeled “no campers here.” I decided, screw ‘em if they can’t take a joke and opted to pretend ignorance: forgiveness being easier to come by than permission. Besides, there were no other places in the damn fairgounds where my hammock could hang.

Mostly, I managed to sleep about as well as usual, for a 70-year-old geezer in a hammock, after I plugged my ears to soften the snarl of snoring and choking and farting and old white man nightmares. Holy crap! I don’t think there was a guy near my part of the park who didn’t need a sleep apnea machine and an oxygen tank and a soundproof/vibration-proof booth to sleep in to prevent avalanches or earthquakes. A large pack of pissed-off lions would have been quieter. To top it all off, one end of my Lawson Hammock broke loose about 5AM and I gave up, packed up, and went looking for a place to eat breakfast in peace. For a farm town, Davenport is awfully urban. I couldn’t find a damn place for breakfast in the whole freakin’ town until 7AM. I didn’t come away with a positive impression of Davenport from that search.

However, breakfast was good if late and I wandered back to the fairgrounds to see what the guys had been up to. Mostly, it turned out, half of that group had an ok night and the other half was at least as miserable as me. They were walking the “display” booths, piles of junk with hilarious price tags, mostly. I walked with them, being an asshole and amazed at the same time. “Really? You guys have come back here for this for 20 years?” Stuff like that. I’d decided over breakfast that I wasn’t going to suffer another night among the shambling old guys and their giant kazoo noses and noises and I started bugging Cal about a half-way spot to meet on the way back home. I figured I could easily find a better campsite than the fairgrounds, a better breakfast place, and get some writing and reading time while Cal and Tim spent a day looking at piles of junk.

Turned out, Cal had a sudden personal reason to head for home on Saturday and Tim was more than ready to cut it short. My only requirement was that we get the hell out of Dodge quick enough to avoid much night riding. So, we made a quick loop of the junk piles, walked the restored vintage competition room, and headed out mid-morning Saturday.

The ride back wasn’t as scenic as the right down, because Cal was trying to cut off a few miles and minutes for the trip. I broke away just out of Rochester and took a deviated GPS-mapped route home up MN 42 through Millville to MN 11 to MN 60 to US61 and home. Sort of the scenic route and much of it was an incredibly fun road for the V-Strom. Would have been even more fun on the WR.
As you might know, I’m not much for group rides. This was about as good as they get for me, though. It probably would have been more fun to drive down and bullshit all the way, but it wasn’t bad. I’m NEVER “camping” in a fairground again, though.