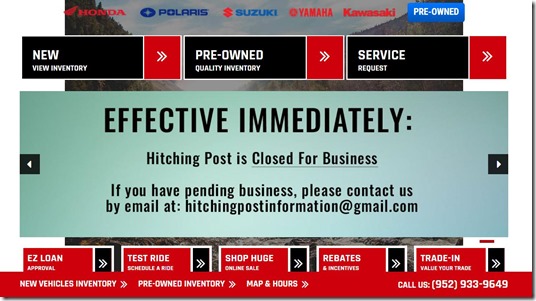 If you are a Minnesota motorcyclist, this is a heartbreaking, eye-opening wake-up call. When I moved to Minnesota, in 1996, the Hitching Post stores were the place for practically every motorcycle brand I am likely to own. The Hitching Post offered group rides for the Big Four Japanese brands every year where a rider could actually put a few miles on a bike Their service department was, at one time, pretty good (that’s the best I can say for any dealer service department). Some of their sales people were motorcyclists. Mostly, the HP stores were distributed all over the Cities and represented the motorcycle economy in our area. Now, they are gone.

Lots of that sort of thing is going on all over the country. Early this year, Polaris decided “to focus on Indian and the Slingshot” and closed down the Victory brand. Personally, I suspect Polaris is just quickly downsizing their motorcycle operation by getting rid of the largest part first. Triumph is downsizing its dealership position all over the country. Apparently, that country overestimated the demand for Triumph products. Eric Buell (EBR) gave it up one more time early this year. In the midst of the Great Recession recovery, Suzuki took the slow down opportunity to pare its dealerships by 20%. More than a few groups that had acquired facilities and brands from smaller dealer organizations gave up recently, such as Ohio’s American Heritage Motorcycles. Yamaha’s fans seem to have a better inside picture of the industry’s struggles than I get from the industry promo rags. They don’t paint a pretty picture, though. A Google search on “motorcycle dealers closing” gets you about a half-million hits with pages and pages of stories about motorcycle dealers giving up the economic ghost.

Somewhere, I read a guesstimate that if motorcycle dealers are going to survive into the next decade, they’ll have to be picked up by big pocket car dealers. Since one of my own favorite dealers used to be associated with a local car dealership, I doubt that is going to be much of a solution.