Seat of the Pants Performance Comparisons

A few years ago, when I was still capable of riding half-quickly and competently off-road, I was riding with a group of Twin Cities Dual Purpose guys north of the Cities. The “route” was a convoluted collection of gravel and paved roads with the occasional single-track and deep sand trail tossed in to provide the illusion of a dual-purpose outing. It might have been one of the first opportunities I had to test my new-to-me WR250X somewhere outside of my daily 6 mile urban commute. It turned out, there was more than just a riding competency and bike capability test available on that ride. One of the other guys had recently bought a used WR250R that had been barely-used and farkled up with a loud “performance” pipe, a Power Commander fuel programmer, a hacked-up air box, and the original owner had removed the AIS and EXUP systems and the “flapper-valve.” Pretty much all of the “performance” weirdness every kid who ever bought a WR might do without any of the nasty riding crap actual motorcyclists would have done first. Both of our bikes had been owned by such children and the WR/R owner had yet to begin the long process of returning the bike to original status and peak overall performance. I got after that immediately and my bike was all the way back to bone stock the day of that ride.

After 30 or 40 miles of the group ride, we all stopped for lunch and the WR/R guy and I compared notes. He was pretty tired of the exhaust noise and wondered if any of the modifications had actually improved the bike’s performance. You might figure, I always assume any “improvements” made by shade tree goobers is a downward evolution. Having been an engineer for most of my career, my appreciation for amateurs is very limited-to-non-existent. We decided that, when the opportunity presented itself we’d “performance test” the bikes on every sort of terrain we’d be riding on for the rest of the day. In our case, “performance testing” mean drag racing the two bikes at every opportunity. Mostly, a drag race eliminates skill from the equation; the outcome is pretty much determined by the bike with the best powerband and peak horsepower. As an unintentional handicap, I was spotting the WR250R about 50 pounds, since that bike’s owner was at least that much lighter than me. He was also a decade younger and a much better, more aggressive rider, for whatever that is worth. 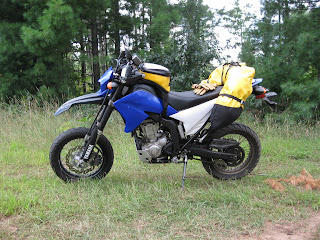 To cut to the chase, the end result was no surprise to me and disappointing to him. On pavement, my WR250X consistently held the advantage. We would start out neck-and-neck, but after 3rd gear my WR/X would begin to pull away until around 70mph when the WR/R began to fall into the distance. On gravel, the results were mixed; pretty much whoever got the best start would end up in front. In deep sand, I got my ass handed to me, mostly based on his skill and my cowardice and, probably, that 17” front wheel that tends to plow into the sand. I was year or two away from having my left hip replaced and, by then, anything that required a firm foot on the ground was out of the question.

So, our shade tree, seat-of-the-pants evaluation of the usual collection of silly “improvements” kids make to the WR/R/X Yamahas was that more is less. You’d hope that doing all of that crap would not have made a 250 slower with an additionally 50 pound load, but it did. 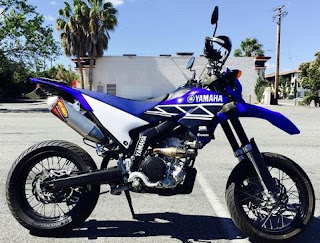 Some of those modifications are, and should be, highly illegal. Yamaha did several things to make the WR/R/X bikes emissions legal, for the US, EU, and Japan. Defeating emissions controls is a federal and state violation and I despise the fact that our states and cops are too lazy and incompetent to enforce emissions violations. In fact, I resent having to pay taxes for cops who don’t care about exhaust noise but pretend to be enforcing the peace (and quiet) of the communities that employ them. Imagining that a low tech sheet metal worker could out-engineer Yamaha is pretty hilarious, at best. The only “tuning” aftermarket pipe manufacturers do is “noise enhancement.” They know you imagine louder being faster and play to that market.

Some of the other “improvements” might actually do something useful, if the entire bike was re-tuned to compensate for the huge change in intake and exhaust pressure curves. However, most goobers are done with their project once they tack on the expensive crap and wouldn’t consider spending another $1,500 on dyno testing and tuning. So, like the 99% dumbasses in The Marching Morons, they mistake noise and an unpredictable and peaky power band for improvement and degrade the motorcycle while wasting money on junk that just irritates the general public, wastes fuel, adds more pollution to the environment, and devalues their motorcycle investment.

The fact is that you can pretty much assume that every dollar you “invest” in aftermarket performance modifications will result in a fifty-cent reduction in the resale value of the motorcycle. You might, occasionally, find a kid who will pay inflated money for a farkled-up mess, but you’ll have to be astoundingly lucky to stumble on to one of those characters who actually has money.
Posted by T.W. Day at Thursday, November 28, 2019