Visible When It Counts

A "feature" of teaching is regular, frustrating failure: failure to communicate, failure to connect, failure to even be able to verify your own existence when you see the "results" of your students' test answers. If you are one of the many Americans who believe that teaching is a lucrative, rewarding, interesting job, I recommend you try it. Too often, it is just frustrating and doesn't even come close to compensating enough for the hassle. Many people who are teachers have the credentials to do something more financially and psychically rewarding and many do so after a very short stint in education. Teaching, as a calling, requires something that is rare to non-existent in modern life, "A good teacher is like a candle. It consumes itself to light the way for others."  You can only do that or so long. If you are smart, not very long at all.

When I hear the usual whining bleat of people working menial jobs who don't think their tips are big enough, I think of all the jobs that don't get tipped at all that don't pay anywhere near enough to compensate for the crap they take from an ungrateful public. In fact, most jobs don't get tips, a decent or livable income, or respect or gratitude. Teachers are high on the list of people in that category. In fact, the well-educated and trained teacher this article featured, "Why a South Carolina teacher quit at 28 — and shared her resignation letter with the world," left teaching for a waiting job which pays better, requires fewer hours, and is way less unreasonably demanding. I'm not complaining about my stint, either as a college instructor or a motorcycle safety instructor. I was in pretty good financial shape when I started those jobs and, mostly, I did them to keep from dipping into my retirement savings before I actually retired and, for a long while, because they were fun jobs. Not having to take the administration of either of those establishments particularly seriously was a giant insulator between my sanity and their general purpose weirdness. If I had been a recently graduated instructor with no financial resources and the typical blob of college debt, my situation would have been drastically different.

The only "tips" I have received from my students have been calls and emails and the occasionally note thanking me for helping them find a career or ride a motorcycle safely. Those come few and far between, not much more than a dozen times in 20 years and thousands of students. Most people think they have paid for a teacher's time and they deserve whatever comes from that. The rare student knows that is not true.

So, with that whining background behind us, a few days ago my grandson, Wolf, called to thank me for all of my years of riding tips, safety harping, and encouragement after he had a near-miss traffic incident when a cager ran a stoplight and nearly clipped him from his eBike.  Of course, the driver was fumbling with a cell phone and "didn't see" either the light or the bicyclist. She also didn't slow down after mouthing "I'm sorry" and drove off without even checking to see if he or his bicycle were damaged. What else is new, right? 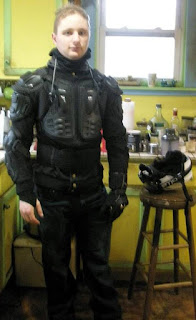 Wolf, has been commuting year-round in Minneapolis by eBike for two years, going on three, and we've had lots of conversations about counter-steering, swerving, braking, and relentless paranoia with the understanding that anyone needing 4-wheels to balance a vehicle is, by default, a moron. Unlike so many of the people who filtered through the so-called "motorcycle safety program," Wolf learned a lot of hard lessons on his bicycle on empty streets in the early-morning hours (he worked night shift for a year) where errors like braking in the corners, applying brakes suddenly, riding with fingers resting on the brakes, and slight lose of attention put him on the ground in the ice instantly, but without a lot of morbidity/mortality risk because he is an AGAT guy. (See the picture at right for a bit of his winter riding gear.) After two years of well-developed braking habits, that event we all hope will never happen did and his smooth, strong application of both brakes brought the bike to a complete stop just before hitting the cager-nitwit. She brushed against his front wheel with her back bumper and almost pulled the bars out of his hands, but the contact was so slight that he didn't go down. 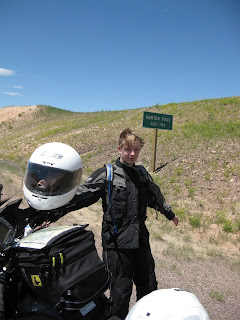 I'm going to guess that I have made at least 750 people miserable in my MSF Basic Rider Courses (BRC) over the last 18 years. In all that time, I have probably had no more than a half-dozen people thank me for anything other than passing them at the end of the course. Many of the people who did pass shouldn't have because they didn't have the skills, attitude, or awareness to be safe on motorcycles in real traffic. The old BRC wasn't even close to a serious safety and skills program and the new one is simply a joke intended to put as many butts on seats as possible. My grandson suffered mightily under my nagging from when he first started to ride a 16" wheel bike almost 17 years ago until this past winter. In many ways, all of the good things I have learned about riding and teaching over the last 50 years all ended up in his lap. When he was 15, we took a Rocky Mountain tour and many bikers were convinced that he was being abused in having to wear full gear, all the time, regardless of the heat. We had a lot of conversations about motorcycle operation, maintenance (his job was the check the tires and do a visual examination at every fuel stop). He did a great job, including noticing a fork seal leak that became a serious problem a few miles outside of Laramie, WY. We lucked into a great Suzuki shop there with a mechanic who knew that there were a LOT of Suzuki seals that would fit in my V-Strom.

If there were anyone on the planet who I would like to have influenced, it would be Wolf. Getting that call was the best tip I could have ever hoped for.
Posted by T.W. Day at Monday, July 08, 2019