Can You Hear Me Out There?

When I taught the MSF program for MMSC, I’d get several questions per class along the lines of “what kind of first bike should I buy?” As you might know from following this blog, I have some strong opinions about that. (“No, you’re kidding?”) Most of the time when I’m giving this sort of advice, I feel like the deaf bluegrass banjo player whacking on a microphone saying, “Can anyone out there hear this thing?” (All bluegrass banjo players are deaf, I know.) It’s almost like teaching when the midterm or final exams get graded and you wonder if you were even in the room when those nitwits came to class.

Mostly, I’d recommend something small, lightweight, that handles well and my ”students” would act like I’d insulted their intelligence, skill, or something and move on to the other instructor for more “manly advice.” As a habit, I recommend a bike around 250cc and one that weighs close to 300 pounds for daily riding. I’ve said this before in “A Good Beginner’s Bike” and I’ll say it again. And again. 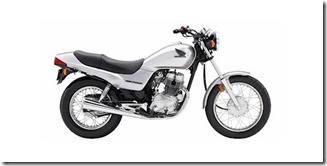 There have been a couple of times, though, when I almost felt like I existed. The first time was in the first couple of years I taught the BRC. Two near-retirement-age physicians took the class, asked the question, and when I suggested they consider the Honda Nighthawk 250’s they were riding in the class. The Honda air-cooled twin is a tough, reliable, lightweight motorcycle that can more than do the job for the kind of around town riding they expected to be doing. A few years later, I was having lunch with a friend in Stillwater when the two doctors came over to our table, reintroduced themselves, and thanked me for the advice. Then, they told me about the trip they’d just returned from to Alaska and British Columbia on their 250s. It was a great story and I wish I remembed it well enough to accurately repeat it here, but I don’t. 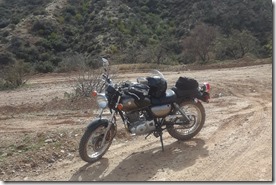 The second time my advice didn’t die in a vacuum was when my brother asked for the same advice. I had been training on the Suzuki TU250X for a few years at the time and had the opportunity to “test” it on the police driving course at Dakota Technical College earlier that summer. The bike did everything a motorcycle needs to do, plus was fun to ride, gets great fuel economy, has a low seat height, and looks like a 1950’s British bike. Larry bought one and is driving it into the ground in Arizona as I write this. His one complaint was that it didn’t do all that well off-pavement, so I suggested a change in tires. As you can see in the picture above, he took that advice, too. He’s had it for a couple of years and 20,000 miles or so and will probably keep it until he rides it to death.

Likewise, I’m down to one motorcycle and taking my own advice it’s my Yamaha WR250X. Since I sold my V-Strom, I haven’t been riding much but I wasn’t riding much before I sold it. This fall or winter, I plan to rig up a relay so that I can run some electrical crap off of the WR’s battery without draining it when I forget to turn things off. I admit it, I’m addicted to my GPS, heated vest, heated gloves, and charging my computer while I ride on long trips. We’ll see if taking my own advice puts me back on the road and trail.