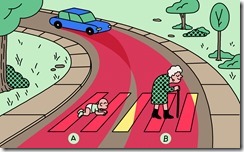 "Should a self-driving car kill the baby or the grandma? Depends on where you’re from" poses a pretty funny question for the ethics department of autonomous car companies in this Technology Review article. Of course, if you are a half-decent motorcyclist there is at least one more option in their example picture; go off road and avoid them both. And what the hell is a baby doing crawling across a road in the first place. Maybe the best solution is to target that kid’s parents. They clearly should not be reproducing. 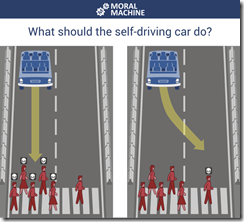 Another scenario from the article has the driver deciding whether to kill five jaywalkers or one. I say use the logic Fat Freddy’s cat’s cockroach general adversary used: “We got millions more where they came from.” It’s not like the world has a shortage of people or jaywalkers. If you want to march across the street against the light,

into traffic with a quartet of nitwits, I think you should enjoy the consequences.

Sarcasim, cynicism, and grumpy old man-ism aside, the above scenario is going to become far more common. We’re already living in a time when large numbers of nitwits walk into traffic concentrating on their cell phones, assuming the world is going to look out for them. Autonomous cars are going to bring a level of false security and confidence to that breed of non-sustainable human that will make the above scenario seem ordinary.

Likewise, when that ethics-challenged autonomous vehicle comes upon a parade of pirates or bicyclists(https://www.youtube.com/watch?v=rmTHk3sxSUA), go for the middle. 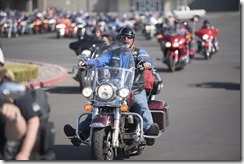 Take on the bigger issue—too many stupid people in the gene pool—and do the world a favor. Yeah, I know. It has been a long frustrating day and I need a whiskey to top it off and mellow me out.