Guido Ebert (ex-MMM editor, current freelance writer) wrote an article for Give A Shift titled, “Motorcycle Sales in the Slow Lane.”  That November, 2017 analysis concluded with “Ultimately, the way it looks right now, the U.S. Motorcycle market could – in a best-case scenario – remain largely flat in coming years. But, despite core enthusiast riders continuing to make desired purchases, a great percentage of the potential motorcycle-buying public will continue to feel impacted by economic stressors, the market will continue to experience an aging owner demographic, and no prominent influencer for major growth appears readily apparent.”

Damn, and Guido is an optimist.

I am inclined to suspect he is right, though. This chart, to be really useful, should include another decade back. In the early 80’s, motorcycle hit a collection of snags that made it seem like motorcycles were about to go the way of the dodo. In 1980, there were 112 fatal motorcycle crashes in Minnesota. That was the peak year for both fatalities and injuries (2,728). By 1982, dealers were folding, manufacturers were stuck with a couple of year’s production sitting on showroom floors, and the national economy was sluggish. All of that happened again in 1988 (Remember “It’s about the economy, stupid?”). 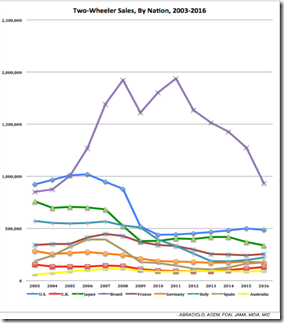 Motorcycle sales aren’t just going down in the USA, though. Brazil was a little late to the runoff, but for the rest of the countries documented in this chart 2007 was the beginning of a fairly substantial downturn in motorcycle sales. Australia and the UK seem to be the only countries that have shown any sort of serious uptick in sales since the Great Recession. The US sales have continued to decline since the 2016 end of this chart and nobody seems to be predicting a comeback any time soon. The 90’s downturn was about a decade long, so this moment could also turn out to be temporary. 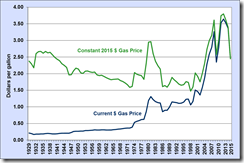 The reasons, or excuses, for motorcycle purchases are thinning out, though. In the 80’s and 90’s, for all but the most radical sportbikes and a few gas spewing cruiser models, we could always pretend we rode motorcycles to save money on fuel. When gas was $1.25/gallon in the 80’s that was a close argument. When gas was $3.50 in the 2000’s, it would have been a more winning argument but car economy really took major leaps about then keeping the operational costs close. Likewise, for most of the time I’ve been riding a new motorcycle was dramatically cheaper than a new car. In 1973, I paid $500 for a brand new 125ISDT Rickman, for example, but my new Mazda station wagon cost $3,000. Today, you have to look deep into manufacturer’s lineup to find anything that is even a little cheaper than a car. A not-legal-in-California Suzuki TU250X costs $4600 and a Nissan Versa S costs $12,000. The low-ball Versa S gets 39mpg (highway), comes with A/C, an entertainment center, decent storage and reasonable comfort, front wheel drive and manual transmission, and a 3-year warranty. Some dealers give you a Versa S just for buying a more upscale Nissan SUV or Titan pickup. If you are looking at a motorcycle with comparable road-worthiness, you’ll discover your purchase price and fuel economy is neck-and-neck with the Versa. So much for an economics argument.

If an economy argument won’t be a seller for potential future motorcyclists, what will? While “adventure” or “freedom” is something that most motorcyclists list as their motivation for riding, most riders are anything but adventurous and pirate parades are more likely demonstrations of human herding instinct than some kind of weird take on individual liberty. Sales of “adventure touring” bikes have been disappointing, with inventory of 2016-2018 Honda Africa Twins, Yamaha Super Teneres, and assorted KTM and BMW bikes stuck on the showroom floors. Cruisers are still selling, but not at all briskly. Small bikes that should be iintroducing a generation of kids to motorcycling are failing to attract any serious attention, regardless of vintage or modern styling. I’m not seeing a bump in interest from Millenials or whatever the next generation of kids is called at the moment. I think that is a problem.