Who to Root For? 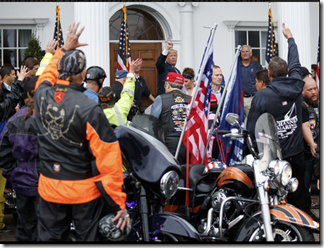 As a 60’s kinda guy, it’s weird to be hoping the FBI wins in the battle between our Russian –plant president and the rule of law and something midly resembling patriotism.

I suspect no one is surprised that the biker gangsters are all stacked up behind Trump, even when Trump is attacking the logo they have tattooed all over their grossly abused bodies. But this headline is really trying the bounds of my own biases, “Bikers back Trump in his rift over Harley-Davidson.” This is clearly one of those movies where there are no good guys. I hope they all dry up and blow back to Russia.

“Bikers have been among the groups most loyal to Trump, as motorcyclists in the United States tend to be predominantly working-class men older than 50 and veterans — demographics that comprise the bulk of the president’s base. Trump has embraced that allegiance, saying recently that ‘I guarantee you everybody that ever bought a Harley-Davidson voted for Trump.’” Of course, Trump is bullshitting, as usual. I know more than a few people who have bought HDs and who hate Trump and his Russian owners as much as does the average person with an above single-digit IQ. Still, the fact that this hasn’t drawn much fire just adds more weight to my already generally massive dislike for all things HD.