The Market Had Its Say? This week, I made the once-every-couple-of-months Twin Cities tour with my wife. Mostly, she had chores and errands to do, but when she stopped at Har Mar Mall to buy art supplies, I snuck out to peruse Barnes and Noble. I got stopped at the magazine rack looking at electric bicycle magazines and articles. After a bit of that, I decided to see what is left of the motorcycle glossy press.

It took a while to find either motorcycle or car magazines. The “Transportation” rack is as far from the entrance and traffic as possible and appears to be barely maintained. Several of the magazines were May and June issues. That was true for the car rags, also. On top of that neglect, a good number of motorcycle “magazines” were actually retrospective “special issues” that could have been sitting on the shelf for months; or years. Along the same lines, a Rolling Stone “special issue” was about Mick Jagger, if that gives you a clue as to the currency of that magazine format. 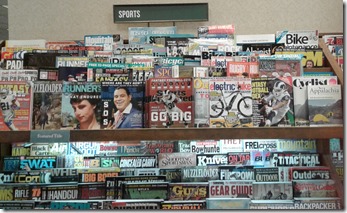 On the other hand, the bicycle section was featured under “Sports” and there were a lot of magazines and articles about electric bicycles in both magazines dedicated to electric bikes and the more mainstream mostly-manual powered bike magazines. The big thing here was that there are a lot of bicycle magazines and there is a lot of interest in electric bicycles; for transportation and sport. A couple of the magazines were almost as fun to read as the old Dirt Bike magazine; when it was edited by Super Hunky Rick Sieman. None of the last twenty years of dirt bike magazines have even come close to that high bar. As I suspected, the traditional motorcycle guys are putting a foot into this water, too. Electric Bike Action magazine had a big feature about Yamaha’s new electric bicycle series. To be sure, in true bicycle and bicyclist fashion, there was a lot of incredibly stupid stuff inside those magazines. 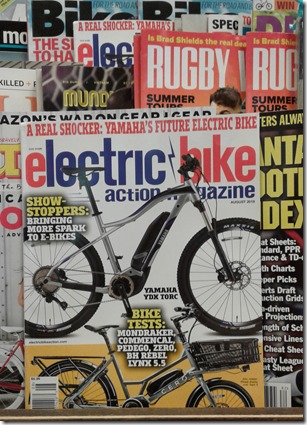 A line that particularly struck me as hilarious in the Electric Bike Action Yamaha article was, “At first we wondered if they were going to sell the bikes at their powersports dealerships. They only plan to incorporate those e-bikes into powersports dealers that already have a bike shop component, and those are few and far between. There’s a big difference between knowing how to work on a motorcycle and and knowing how to work on an electric bike.” That is true, kiddies. Anyone who can work on a fuel-injected, electronic ignition, fly-by-wire throttle-controlled, ABS’d, and state-of-the-art motorcycle will find electric bicycles to be too simple to be interesting. The customer base will lower that bar even further.

Times are changin’ and they are changin’ a lot faster than many expect. Powersports dealers are beginning to scramble for new revenue sources. It’s no stretch to imagine that a dealer who sells a few motorcycles, a few more ATVs, even more boats, and a buttload of golf carts will find a lot of reasons to become one of those “powersports dealers that already have a bike shop component.” A few bicycles on the showroom will cost a lot less than a few motorcycles that can’t be moved at any price. If that’s what it takes to get in on the electric bicycle boom, I suspect it won’t slow many dealers down.

Clearly you haven’t priced up said “bicycles”? I have paid as much for some of my mtbs as I did for my “new to me” 2015 BMW F800GS with 10k miles last week. A new high end mtb will cost more than most dirt bikes up to 600cc. (Well, here on planet Australia they do)

They do here and I commented on that weird fact in an essay a few years before I retired: http://geezerwithagrudge.blogspot.com/2014/12/86-my-kind-of-market.html. Although with $18k-30+k motorcycles on the market, a $2500 electric fat tire bike looks pretty good.

Fat bikes handle like Harleys. Clearly not a great selling point for the tech.

Never ridden one, but I see people riding them year around, even on sub-zero days, here in Minnesota and, even, in Red Wing. Pretty sure Harley's can't do that. I am amazed at how light those fat tires are, though.

Yep, the way things are going, pretty soon the only paper left will be that found wrapped on a spool next to the throne.

I suspect fresh cut meat might outlast toilet paper as a paper application.

After putting on 250 miles in the past week on my recumbent, I have to disagree with you. I still really like the bicycle, but recumbents are definitely the Harley's of bicycles.