Never Do That Again? 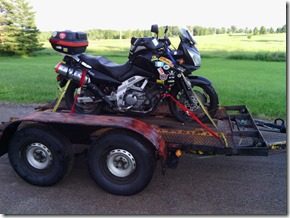 When my V-Strom rolled away on its new owner’s trailer and headed north to its new home, one of the first things I thought was “I’ll never do that again.” By “that,” I mean invest that much time and money in a motorcycle. Considering the years and miles, I didn’t have all that much money invested in the V-Strom: 12 years and not more than $5,000 not counting fuel. Still, I put a lot of time, thought, and even hope and love into that motorcycle.

Over the years with Minnesota Motorcycle Monthly and the Minnesota Motorcycle Safety Center my V-Strom had been a test bed for all sorts of products; from air horns to auto-chain lube devices to excessive electrical experiments (everything short of a 120VAC inverter). I long-term tested an Elka shock that listed for about what I sold the motorcycle for. I even longer-term-tested the very first Sargent seat designed for the then-new V-Strom 650. I put hours of customizing (for touring, not for looks) into this motorcycle over the first decade I owned, especially the first 5 years. While I thought all of my modifications were to make the bike suit me, when the current owner sat on it and took it for a ride, he seemed to think it was perfect for him.

Fifty years ago, my brother brought his Harley Sprint 250 to my place, to hide it from our parents (mostly our father). It was there, what was I supposed to do? I started riding it . . . everywhere. I crashed a lot and things broke. I started taking unnecessary things off of the bike; like headlights, turn signals, the speedo, fenders, and I learned how to weld and braze so I could repair the frame pieces I snapped off of that bike. In a few years, I had my own two-stroke bikes and I really got into “customizing” my off-road race bikes: blue printing the engines, Preston Petty fenders, intake and exhaust mods, carburetor modifications, frame and suspension upgrades, and that went on for years. Every dirt bike and every street bike I’ve ever owned has become “mine.” 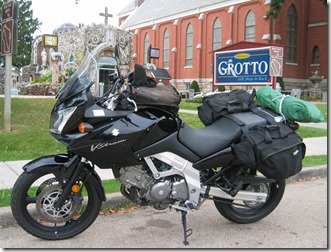 I bought my Suzuki V-Strom in 2006, when I was 58 years old. I bought that bike with an Alaska adventure in mind. Practically the day I rode my V-Strom home I started to get it ready for a 13,000 mile trip and seriously long mileage days. Since that first long trip in 2007, my V-Strom has taken me across the country a few times and across Canada once. We’ve driven at least two thousand miles of North Dakota dirt roads, across sections of Montana and Wyoming that I suspect few locals even know exist, and we explored some of the “minimum maintenance” roads I once rode on my 1973 Rickman back when I lived in rural Nebraska. So many qualities of that motorcycle were tweaked for my comfort and preferences that it seemed almost biological. I literally spent months working on that motorcycle, either modifying it or getting it ready for a long trip to somewhere I’d dreamed of traveling. I spent months on that motorcycle riding to places and seeing things nobody else as ever seen the same way. It was truly my “adventure bike” in every sense of the words.

In 2009, I bought my Yamaha WR250X and the six modifications I’ve made to that bike are a seat cover, a larger fuel tank, a home-made tail rack mount for extra fuel storage, serrated pegs, a bolt-on windscreen, and heated vest wiring. The original owner did a bunch of stupid stuff to the bike and I returned all of that to bone stock. When I sold the V-Strom, I’d planned on buying a Sargent seat for the WR but so far I haven’t been motivated to do that. It still might happen, but it’s more likely won’t.

One thing I know for sure is that I will never put as much effort, thought, and hope into another motorcycle as I did the V-Strom. No motorcycle I will ever own will be as much my own as that bike was. I’ve made a couple of guitars in the last two years and they got that kind of effort. The house we' bought in Red Wing was a serious fixer-upper and it has become pretty personal looking. The time in my life when I will be making plans to cover a bit of the earth on a motorcycle that needs to be molded to fit my needs is over. I’m not mourning those days, even a little. I, literally, had a great ride and I’m grateful for the good fortune that put me, the Suzuki V-Strom, and the opportunity to take advantage of that freedom in the same place and time.

Is it weirdly sad that I don't even seem to miss my V-Strom? The guy who bought it is having a great time with it and I'm pretty happy about that.