An early June Sunday morning, my spouse decided we needed to take a drive to River Falls, via back, Wisconsin highway patrol-free roads. We have a leisurely route, after escaping WI 35 ticket-free, that will take us to our usual destination pretty stress-free most days. Not Sunday, however. That county road was cluttered with arrogant middle-of-the-road bicyclist obstacles and blasted with a half-dozen pirate parades and a couple smaller groups of lane-challenged sportbike pretenders. The drive, in either direction, was way too tense to be enjoyable.
As I watched one pack of pirate bikers waddle towards us, marginally in their opposite lane and demonstrating no signs of competence, I wondered, again, why people feel compelled to ride in groups. In an Experienced Rider MSF course, a few years back, one of the students described motorcycling as a "social activity," which about floored me. He was, obviously, right, but it had never occurred to me that anyone would pick a vehicle that is clearly designed for solo exploration, minimalist transportation, and general anti-social behavior (Yeah, I'm talkin' about you, Victor.) and imagine it to be the perfect platform for a group activity. A few years later and I'm no less baffled by that realization than I was when I first heard it. So, I kept thinking about it as I dodged the not-so-rare idiots on hippobikes wandering near my lane with their naked, bald heads shining and their wide open eyeballs target fixating on the front of my pickup. I came to a conclusion as to what all this silliness is about, but you probably aren't going to like it. 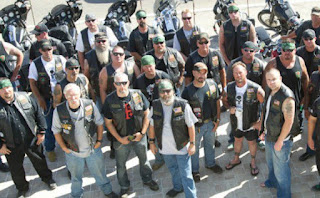 For most of my life, I've viewed groups of men and boys as being at once homophobic and homoerotic. The badass biker crowd with its freaky gangbanging activities, and attraction to outfits the Village People would have thought were too poncy in the heyday of disco, are clearly dealing with some sexual identity issues. It's not that different from the "gay for the stay" pretence men in prison use to justify their confusion, but it is slightly scarier since these maladjusted characters are out in the general population; at least until the next time they get caught and end up back inside. None of that is any different than frat hazing behavior or the military or rappers and their posse pals or those militia freakshows: guys congregate in packs to keep from having to think about which side of the street they want to walk. 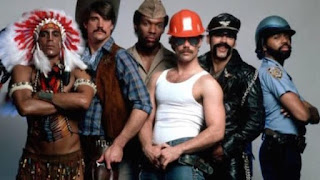 Obviously, I don't care, one way or another, if people are hetero or homosexual, but packs of stray men are never a good thing. Packs of physically inept, overweight, peer-pressure intimidated men (and equally confused women) on oversized motorcycles are much worse things. There are no statistics that I can locate that account for motorcycle crashes in group rides, but it's hard to find a group ride story that doesn't include at least one nitwit who overshot a corner or ran into the back of another motorcyclist or ended up in the wrong lane. Watching these folks try to hold their place in the "formation" while negotiating curves at speeds picked by the group leader and desperately trying to look "cool" is just a little sad.
And it's all because motorcycle parades are the socially-acceptable way for men to travel in groups on a sunny Sunday afternoon.
Several years ago, my brother came to visit and to go with me on a "ride" around Lake Superior. We don't get to see each other much, mostly since he lives in Arizona and I can't think of any good reason to visit that state. So, we travelled on my two motorcycles for almost 2,000 miles. The two bikes get about 50mpg each, so we averaged somewhat less than 25mpg for the trip. He got lost a couple of times because I tend to try to keep 2-3 miles between me and other vehicles, whenever possible, and he has the family tendency to wander off on the nearest interesting looking dirt road to see where it ends up. Overall, it was a mediocre trip and we probably got to spend about 8 waking hours actually hanging out over five days. It would have been cheaper, more fun, and at least as adventurous to have taken my 1999 Ford Escort wagon and I'd have known something about his life since the last time we hung out.
In the early 90s, I was renting a basement room from a friend in Denver and financially and mentally recovering from ten expensive years in southern California, raising two daughters, and starting a new career at age 41. During some holiday break, three friends decided they wanted to drive to California to see the sights while I hung out with my family for a weekend. Part of the motivation was that one of the guys had just restored a 1960's Buick convertible and he wanted to try it out on a road trip. We made it from Denver to Idaho Springs, about 50 miles, before the Buick died. He had AAA tow the Buick back and he picked up my Toyota van and drove it back to Idaho Springs to collect the rest of the group. With nothing but time to waste, we all decided we'd stick with the roadtrip plan, even though the van only had two front seats because I'd hollowed out the back to serve as a cheap camper. If we got stopped, it was a safe bet that we'd be looking at seatbelt violations, at the least. If we crashed in the mountains or at any reasonable speed, missing seatbelts were the least of our problems inside that Toyota tin can.
We drove straight through, taking turns at the wheel, holding down shotgun duties, and sleeping in the back. About 1,000 miles and 18 hours later, we rolled into Huntington Beach, rested, relaxed, fed, entertained, and ready to split up into two groups: me with my family and the other three guys exploring California. They headed for L.A. and Universal Studios and I enjoyed a few days with my wife and daughters. That was one of the best road trips of my adult life and the only actual group ride I've ever enjoyed. Like many families, mine didn't travel together much and when we did it was usually for something miserable like a funeral or wedding. That California roadtrip was the closest thing I'd ever experienced to an actual family vacation. 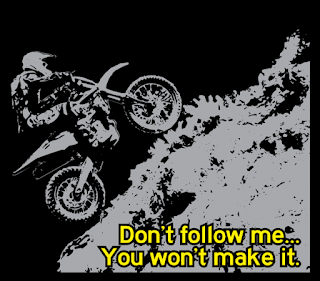 The next-closest tolerable-to-decent group rides were all of a similar sort. The same three guys and one other were the only motorcyclists I knew while I lived in Denver. One of them, my landlord, was an experienced, talented rider and the other three hadn't (and wouldn't) put 1,000 miles on their used motorcycles or on themselves in their motorcycling "careers." All four of those guys were committed pavement motorcyclists while I was still trying to decide how I felt about asphalt and concrete. We often took Parker Road toward Colorado Springs after work or on weekends. If we were going all the way to the Springs, sometimes I'd take CO67 to Rampart Range Road and the military training road along the the eastern ridge into the Springs. We'd pick a destination and a meeting time and I'd cut out early and head for the mountains while the other guys took the shorter, quicker but less scenic route. Since they rarely hit the road before noon, even though my route was twice as long as theirs, I'd still end up at the end point a little early.
And that's what I'd call a decent "group ride."
However, when it comes to taking a trip on a motorcycle, it still makes more sense to me to do it solo. But then, I'm not worried about what anyone else's opinion of how I travel or who I am traveling with.

Email ThisBlogThis!Share to TwitterShare to FacebookShare to Pinterest
Labels: geezer with a grudge, group riding

I've read this rant twice and I can't decide if it is politically incorrect, right on, or just demented.

It's always a safe bet to put your money on "demented."