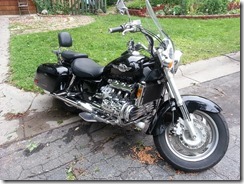 [Should that be “Kill the Wabbit, Pweese?”]

A friend proudly put a picture of his Honda Valkyrie on Facebook the other day. We, in jest (I hope) had a few words about his opinion and mine regarding this chrome-laden hippo bike. When the Valkyrie first came out, in 1996,I thought it was the butt-uglist motorcycle ever produced by anyone, including the gods of ugly; Harley. It arrived in a variety of horrific paint schemes, all Harley-replica stuff, and every year until 2003 when Honda quit puking out these damn things it got uglier. I didn’t know, until recently, that the Valkyrie was a US-made Honda, from Marysville, OH. Figures. They probably coudn’t find any Japanese tasteless enough to work on it.

There is only one thought that comes into my mind when I see a Valkyrie, usually stationary with a “for sale” sign duct-taped to the windshield.

This one is pretty good, too.

I wish I could claim this as an original thought, but the credit belongs to a friend, Brett Rihanek, who spontaneously made the connection the second he saw the first Valkyrie ad.

Regardless, the Honda Valkyrie is still the posterchild for all of the gross Boomer hippobike excess that led up to the Great Recession and the current motorcycle downturn. 720 pounds of blubbering, over-complicated (six 28mm carbs?), waddling incapacity. You can not go anywhere on this motorcycle you couldn’t travel more comfortably in every cage ever built. To put a cap on the grossness, Honda topped their ugly-fest with the Valkyrie Rune. This POS goes so far beyond ugly that I don’t have a category for it. 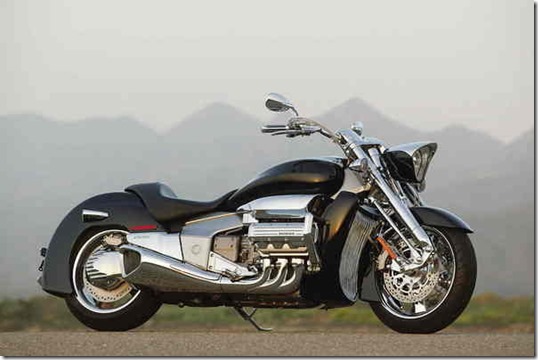