Our Own Worst Enemies

Yesterday, on the way up to Steamboat Springs via CO 14, I got a taste of why the MMSC keeps publishing those silly “Start Seeing Motorcycles” stickers. The road was pretty packed with bicyclists for the first 40 miles. RVs and cages were intermittent and moving easily at the speed limits. Half way to Walden, a half-dozen squids on sportbikes wearing everything from full leathers to jeans and a jacket came blasting through the traffic, passing on both sides of the uphill lane, squeeking into spaces between cages where they barely fit, passing so that traffic in both directions had to make evasive maneuvers to keep these Darwin Award applicants from fulfilling their deathwish, and making as much noise as a poorly setup sportbike in 1st gear at 50mph can make. A dozen miles later, the clueless pack was scattered at a rest stop planning their random motions back down the hill, I imagine.

There is no shortage of reasons motorcyclists are among the world’s least popular people. Do a Google search for “I hate motorcyclists” to get a taste of opinions, reasons, and the level of anomosity. We’re loud, arrogant, incompetent, dangerous and self-destructive, expensive, selfish, and we whine a lot. We make such a small contribution to actual transportation that we probably shouldn’t be allowed on major highways or, even, public streets. We kill and maim ourselves in big numbers, barely make a noticable dent in miles-driven on public roads, and we expect more special rights than any other minority group on the road and, maybe, in society (especially considering our meager “contribution”). 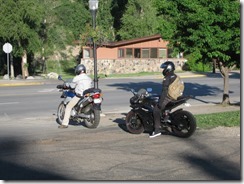 This pair of clueless squids started off my morning by making a super noisy pass through the motel parking lot, stopping at the lot’s exit to play with their cellphones (I was too late to get both of the dweebs “tweeting” or whatever it is that dorks do with their phones in such situations), exited to the right, made a u-turn in traffic, and passed back the opposite direction as noisly as possible. Clearly, motorcycle licenses are WAY too easy to get.