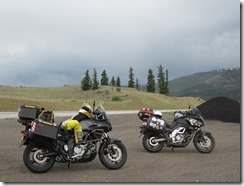 Scott and I took a relatively long drive, yesterday: from Cottonwood Hot Springs to Pagosa Springs. We split up and took two different routes. I wanted some of the US 50 experience and he wanted to try out a barely-marked road from Cottonwood part way to Gunnison. Apparently, the two routes are pretty similar, since we arrived at the designated restaurant close to the same time. From there, we rode to Pagosa and arrived around 4PM. 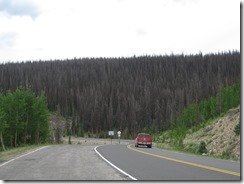 On the way, I saw some seriously decimated pin forests. I took this shot because I felt that it did a fairly good job of showing how badly damaged the southern Colorado pine forests are. We drove through almost 50 miles of this kind of scenery. Nearly, the only green on the mountains were deciduous. At least 90% of the pines are dead or dying. The Forest Service is solidly between a rock and hard place. The forests need to burn to kill off the bugs that are killing the trees. If the take burn, they will take out a lot of property and people will be whining that they’re not being protected properly. 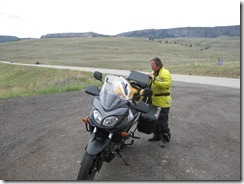 I snagged a shot of Scott reloading his gear at a quick roadside stop; just toi prove that I have at least one real friend on this planet. There have been doubters out there.

After a day hiking around Pagosa Springs and hitting the hot water hard, we crashed fairly late for us and I got up early to do a full pass maintenance on my bike. About 7AM, I hit the road toward home. Two hundred miles later, I stopped for a few hours to catch up with an aunjt and uncle who live near Castle Rock. From there, I hit the road about 5PM, so instead of taking the familiar route up I76, I went straight west and followed CO 86 to I70 where I’ll turn north at Colby and head into Nebraska. 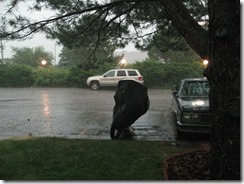 North of my route, the weather looked fierce. Storm clouds were black and ominous to my left for 100 miles. Eventually, I wore out and the rain started to slide my direction. I found a cheap motel and unpacked quickly. Before I could get back, it was pouring. I got soaked bagging up the bike buit it was worth it. The streets were overflowing and myt rear case is not particularly water-tight.

Tomorrow, I head north in about 60 miles.