One Down, Some to Go 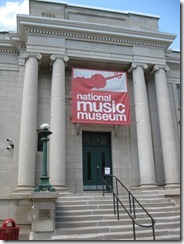 My first day on the road lasted about 12 hours and a little less than four hundred miles. Not much by Iron Butt standards, but pretty good considering I spent almost three hours in the National Music Museum in Vermillion, SD this afternoon. After a winter spent learning how to build an acoustic guitar, this museum means even more to me. I have a new appreciation for nlay work, binding and shaping, complicated shapes, structural bracing, finishes, and the creativity and artistry that luthiers and instrument makers have exhibited over the centuries. I’ll post the pictures I took at the museum here, but if you have any interest in wordworking, metal work, or art you should visit this national treasure yourself.

Supposedly, last year when Scott and were at the museum, the big exhibit was Bill Clinton’s sax. I don’t remember it, if I saw it. That was a cluster-fuck of a visit, since Scott was panicking over a lost master link clip on his Honda. I got drug into his deal and that pretty much turned the museum visit into a multi-tasking event and I am unable to do that dance. This time, I wallowed in endless time (3 1/2 hours before the museum closed) and mono-tracked on the museum contents. As a destination, Vermillion is pretty satisfying. 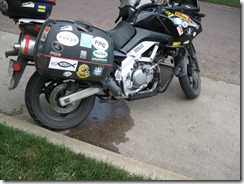 When I came out of the museum, a couple of guys were looking at my bike as if they had something they needed to say to me. There was a nasty puddle under the bike and it sorta looked like I’d sprung a leak. I’d had the bike covered and the “leak” was my Camelbak dribbling all over my gear. No problem.

I left Red Wing about 6:30AM this morning. Taking MN 19 west until it eventually merged with MN 60, I kept at it until breakfast at Mountain Lake, MN. I’d show you a picture of what I ate, but you’ve probably seen breakfast before. If not, I recommend the only restaurant in Mountain Lake where you can eat a decent omlet and take your own picture.

On my to-do list was “take lots of abandoned building pictures.” Everytime I passed a cool looking relic, there was a cage or semi on my ass. So, not a single historic building in the camera today. My razoo Garmin Nuvi 500 routed me along mostly two lane roads except for when it tried to send me down dirt roads or when I hooked up to 60 for a while. That got me to Vermillion at about 1PM. I made a couple of laps around the museum and left Vermillion at 5PM.

Road construction and impatience sent me down a Nebraska country road that turned into about 20 miles of intermittent deep gravel and sand. Finally, I hit NE 15 south to US 20 west and I was making time again. Since tomorrow’s goal is Nebraska’s Ashfalls State Park, quitting early seemed like a good plan. 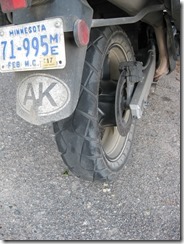 I found a cheap motel in Randolph, NE and settled down for a quiet evening with a book and my blog. However, after pulling the gear off of the bike I did a maintenance loop around the bike. Son of a bitch if my nearly new back tire wasn’t already bald! If you look at the damn tire in the “leak” picture above, it looked good. Less than 100 miles later and the Bridgestone Trailmaster has worn to nothing. About 30 miles of that was gravel road, so if that’s what “Trailmaster” means to Dunlop, I’ll be remembering that when I replace the tire.