Everyday, I get a little more insight into why motorcyclists die at such unreasonable rates: we are nationally more than 10% of highway fatalities and an incredibly small percentage (less than 0.01%) of the total traffic. This is a fact that threatens motorcycling as a transportation mode on public highways all over the world. Because motorcycling is mostly a recreational activity, our benefit-to-cost ratio is a small fraction of practically every other vehicle on the road. That is beginning to attract the attention of the folks who decide who gets to play where.

I was at a stop light, waiting for green, when I saw a big, black cruiser with a middle-aged rider (helmet-less, decked out in Village People leather, and practically invisible in the early evening light) approaching the signal from my right. He was concentrating on a cool-looking pose and he conveyed the bearing of a man traveling by motorized Lazyboy. From the other direction, a mid-sized SUV was about to make a left turn across the path of the cruiser. Since the light was yellow and the station wagon was already in the intersection, the cage clearly had the right of way. The bike wouldn't clear the entrance to the intersection until after the light had changed to red. At the last minute, the station wagon driver saw the bike approaching and nailed the brakes. The station wagon slid few feet into the on-coming lane and came to a noisy stop.

Whether by design, inability, or inattention, the cool cruiser guy didn't make the slightest move to avoid the oncoming cage. He didn't even cover the clutch, let alone the brake. He didn't swerve or slow down, he just stared at the cage as if he was Darth Vader and the cager was one of those Return of the Jedi teddy bear things. He just clung to the bars like a pair of streamers, glared at the cager as he rolled past, barely clearing the wagon's bumper.

I don't know if you've ever had a 50-year-old bald and bearded Village Person glare at you, but it's not particularly unnerving. I might have misinterpreted a look of panic for an angry glare, but it's hard to tell what expression is behind large dark sunglasses and a ZZ Top beard. If that's a typical motorcyclist's hazard avoidance maneuver, no wonder we're dying at a rate more than 100 times our highway presence. If the station wagoneer hadn't managed to get control of his vehicle, he'd have ended up with motorcycle and leather splattered all over the side of his spiffy new urban assault vehicle. Since the biker was totally unhampered by functional protective gear, the chances are pretty good that the biker would be dead or severely injured, adding another body to the statistical mountain of motorcycle crashes. 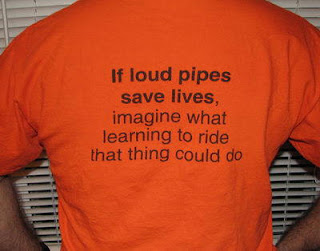 A few nights later, my wife and I were caging it on a one-way downtown Minneapolis street when two twenty-something dudes on liter bikes rolled up beside us in the far left lane. They parked side-by-side to pose for their imagined admiring minions and engaged in a heated discussion about something stupid. Their helmets were firmly strapped to the left side grab-bars. Their arms were bare to show off their toned biceps and lower halves were protected by leather sandals and baggy shorts. When the light changed, they blipped their non-stock exhausted motors, apparently to alert me and other traffic to the fact that they were on the move. I was in the left-turn-option lane and had been signaling a left turn. The two chicken-strippers paddled into the intersection, so I gave them some room to stabilize their bikes and was surprised to see that they ignored their lane's left-turn-only status and rode straight ahead and wobbled into my lane at the middle of the intersection.

Per the title of this rant, I have given you two examples of why we die so often. As Keanu Reeves' character once asked, "What would you do?" What would you do if a large station-wagon rolled out in front of you? Would you be stuck glaring at the approaching deathtrap, showing attitude and foolishness all the way to the last moment? Would you desperately hang on to the bars hoping your exhaust noise will magically move all obstacles from your path of travel? Would you apply some motorcycling skill to try and avoid that traffic obstacle? Do you have any motorcycling skills to apply?

If your skill doesn't get you past the cage or through the turn, do you have enough gear on your body to be able to survive a little impact? A motorcycle safety expert once said, "You crash in the gear you left home wearing." Someone a lot less brilliant said, "I'd wear my helmet if I knew I was going to crash."

If I knew I was going to crash, I'd take the bus. Why the hell would anyone get on a bike if they knew they were going to crash that day? Better yet, stay in bed. If you know the only hazard-avoidance move you have is a menacing glare or a loud exhaust note, staying in bed is always your best policy.

If this incident is in any way typical of the kind of brainless motorcycling that has generated such awful numbers for motorcycling, we need to change motorcycle licensing. An IQ test should be added to the usual exam. I'm convinced that the Powers That Be (society and society's bureaucratic employees) are only going to put up with motorcycling for as long as it takes to figure out how to lower the risk of this activity. I think we have a simple choice; we can reduce our fatalities or someone else will do it for us. The easiest way to eliminate motorcycle crash numbers is to remove motorcycles from public roads.

Since most motorcyclists are recreational riders--don't commute or ride for practical transportation--who would it inconvenience if motorcycles were banished from highways? Who did it inconvenience when horses and horse-drawn carriages were banned? Did anyone care when 2-stroke dirt bikes, snowmobiles, ATVs, and go-carts lost the privilege to travel the streets? How about when those same Powers decided that bicycles, small motorcycles and scooters, and other high efficiency vehicles would be banned from freeways? "No," is the correct answer. All these perfectly useful means of transportation have been eliminated from normal traffic because the Powers decided their risk was too great and the reward was too small.

I used to say that I thought you ought to be able to ride well enough to get out of the novice class in almost any racing format (off or on-road, except drag racing) before you get a motorcycle license. Today, I think something that dramatic might be required to save motorcycling. Guys who hope that a mean look or random noise is going to save them from catastrophe need to be educated. Riders who think looking cool is more important than staying alive, or those who aren't smart enough to know they are making that choice, need a massive dose of reality. We need to work toward zero tolerance for motorcycle fatalities. Fix it or lose it.

I'm telling you this out of personal experience. I have seen a civilization full of vehicles removed from public roads. Lucky for me, I'm old and the worst that will happen is that I won't spend the last couple years of my life on two wheels. You, on the other hand, may be telling your kids about the cool bikes you rode when you were young and how they were all swept from public roads so fast you didn't even have time to sell yours before they became Shriner parade items.

Very astute in connecting the dots. We've had decades of missed opportunity to set the riding community onto a more sane path. It seems men need more evolution to lose the attitude that power trumps safety....not manly enough or whatever. Thanks for the insight.

At the motorcycle show, I talked at length with a long-time motorcycle trainer who described his experience with the new California system. This, unlike most of us, is how he makes his living; training new motorcyclists. In the end, just before we split up, he leaned close and said, "I agree with you. We have to get motorcycle crashes and deaths down, dramatically, or it's all over for us."

The "start seeing motorcycles" campaign is a joke, too. It's been around for what, 25 years?
There are two problems with it, the first is in most places there aren't enough of us out to bother watching for, and second, it's a passive approach to safety. Relying on a bumper sticker because "they need to watch out for us" is a fools mission.
The hardcore commuter/adventure/road warrior type rider puts on thousands of miles unscathed because they are watching out for themselves.

I'm with you Paul. That's the core of my own "Start Seeing Unicorns" campaign.