#98 The Tale of Two Opinions

At the beginning of the winter of 2010, Yamaha's Super Ténéré XT1200Z was making the rounds of the Cities' Yamaha dealers. A friend who temporarily back here over the holidays called and asked if I wanted to chase the Ténéré down and take a look. He is a current Yamaha 850 TDM owner (the bastard grandfather of the Ténéré) and I owned a couple of them not that many years ago. We both consider the TDM one of the best big dual purpose bikes ever imported to the US. Getting a look at the TDM's adventure touring spawn seemed like a worthwhile way to spend a winter afternoon, so we made plans to meet at the Hitching Post.

The Ténéré was worth a visit. Ténéré stock or as a Yamaha accessory, this bike has pretty much everything I think a motorcycle should have; long suspension, high ground clearance, shaft-drive, crash bars, bashplate, a decent fairing, big luggage capacity, a comfortable seat, comfortable riding position, a tough steel frame, large fuel capacity, and serious lighting. Buy it, ride it anywhere, farkel it up to taste but not out of necessity. Fourteen grand and the usual tax and insurance suspects and you're out the door with a GS-Beemer-buster for about one to three grand less than a new GS. What's not to love, right? Fourteen thousand dollars, that's what. 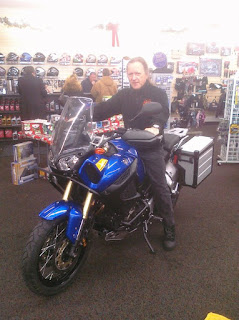 My friend posed for a picture on the Ténéré and stuck it on his Facebook page with a "my next bike" warning to his virtual and real friends. When some of our mutual friends heard that I took that picture, they asked if it would be my next bike, too.

For my tastes, the Ténéré is too much bike; two-to-five times too much bike. The TDM's 850cc's was the biggest motorcycle I've ever owned and, having done that once, I don't expect to own that much motorcycle again. To generate even more disgust from my friends, I admitted that the Ténéré is about four times the price I'd consider paying for a motorcycle. I bought my 2004 V-Strom in late 2006 for $3400 with less than 900 miles on the odometer and that was pushing the limits of my budget. My friend, on the other hand, was talking about financing and justifying the payments in the usual All-American ways.

In his 2010 New York Times interview, Ducati's ex-North American CEO said, "No one saves up to buy a motorcycle. They sign up for a credit loan." As usual, I'm either "No One" or "Nobody." The same kind of Nobody who read Tom Clancy's Executive Orders in 1996 and had no problem imagining that the country could be attacked with a commercial airplane. The same No One who wasn't surprised to hear that large numbers of 3rd worlders hate the United States with a passion. I read William J. Lederer and Eugene Burdick's The Ugly American in 1960, when it was a junior high English book assignment. The same Nobody who argued that Afghanistan had been a quagmire for empire builders, at least since Alexander the Great, and had Vietnam déjà vu in 2003. The same No One who suspected that the economy was out of whack when my real estate agent and mortgage broker insisted I could afford a house that cost five times my annual salary. Ten years later, Las Vegas waitresses were buying half-million dollar mansions on credit with no money down and economists claimed that was a sign of a strong economy and claimed that "Nobody could argue that home ownership was a bad thing." Me. Mr. Nobody. Pretty much every time the media or the powers-that-be claims that "Nobody could have seen this coming," and I'm out there being Nobody and No One. I don't have any prescience when it comes to spotting good investments, but I can often see stupid when it begins to rear its empty head.

When it comes to gratuitous purchases like a new motorcycle, especially when my old one is perfectly serviceable, I always wait till I have cash. If I don't have the cash, I keep riding what I own. Worst case, I'll buy a rat bike and ride it while I save my money. I'm not happy about being in debt for my home, but that's all the debt I'm willing to take on. So, I'll just keep plugging along on my used 650 and my beater 250 until I can justify a replacement and pay for it with cash.

This might come as a surprise to you, but there are no good deals waiting for those who use credit. After taxes, fees, and interest over a 48 month loan, that $14,000 motorcycle will cost you (not me, you) just short of $18,000; not counting insurance, licensing, and the usual maintenance culprits. I am not man enough to pony up twenty grand for four years of motorcycle ownership, without even having gone anywhere. Hell, I'd be afraid to go anywhere I'm interested in going on a $20,000 motorcycle.

Dirt roads have a magnetic effect on me and that often means getting in over my head and the occasional low-to-moderate speed spill with the mandatory scratch, gouge, and/or mangled plastic bits. I've been known to Gorilla Glue, duct tape, bungee cord, and wire-wrap my bike back together and keep going leaving the real repairs for the end of the season. I have never reported my minor incidents to either the police or my insurance company. Why would I? They usually don't happen on publicly maintained roads.

The cops don't care about a "crash" I rode away from and what's the point in calling the insurance company about something I'm going to fix myself? If I need counseling, I'll ask my wife to lecture me on one of my many faults. At least she doesn't think I'm Nobody. I'm the idiot who keeps mangling himself on his motorcycle, in the garage or yard, and at work. At home, I'm Somebody.

as you say in america fucking A

I agree totally, everyone just buys a bike these days on credit. some sort of rubbish about a "bucket list" ambition.