Another Shitty Day in Paradise 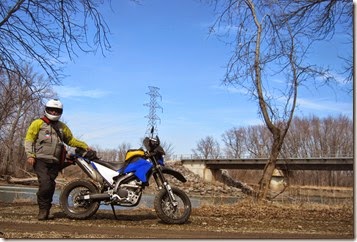 Almost 70F again in Minnesota and I had to go into the Cities to meet an electrician about work that may (or may not) be necessary to sell our old home. I wish I could say this damn deal is nickel-and-dime’ing me to death, but it’s more like thousands of dollars that I have no reason to be spending other than having made a mediocre deal. That’s the shitty day part.

The ride home was pretty boring, even if it was my 2nd ride of 2015. Just a little west of Red Wing I noticed a torn up clay road heading northeast. I circled around and headed into it and I don’t know how many miles later ended up at a dead end boat launch. On the way, I slogged through frozen slick clay sections (the source of that famous Red Wing pottery), a couple of flooded road crossings (paved underneath, so it wasn’t much of an adventure), some axle deep mud sections, and amazing scenery. That’s the paradise part.

PS: While I did gain some MN winter weight, there are two layers of insulation under that jacket. It was 32F when I left this morning.

There's nothing like exploring a trail that whispers: "come on and see what's around the next curve...."

So nice to be on a bike where you can "see where that road goes". I was on the Gladius yesterday so no dirt roading for me.

Oh boy! Where does that road go?!? Does it matter if it gets your mind off your troubles for a while?
Glad you were able to get a ride in.

It deadends into a big boater turnaround. That day, the only vehicle at the end of the road was a pickup that was stuck to its axles in mud.