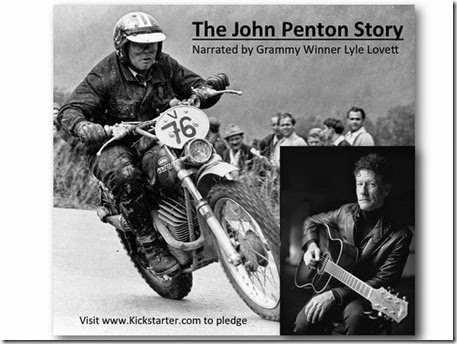 If the opportunity to see this film is as rare in your community as mine, you might have already missed your chance to see it on the big screen. As you can see from the picture, a lot of this film was financed from a Kickstarter.com campaign. A lot of my resistance to art-by-begging has been overcome because of this work. This one movie is so totally deserving of being seen by anyone who has ever put a pair of tires on dirt that I have completely revised my opinion of all things resembling artistic panhandling (which is what Kickerstarter is).
John Penton almost single-handedly drug the USA into off-road competition. The crap we were riding from US, Brits, and other Eurotrash manufacturers was pure pain and misery to ride. You just had to love being off-road to put up with the hardware. Penton’s “ready to race” motorcycles changed everything.
The Bob Hannah interview segments are worth the price of the whole movie. Bob was my second real motorcycle hero, Malcolm Smith was and always will be the first, and he might be the least well-interviewed man in sports history. Because he’s so contained, most dweeb interviewers piss him off and get nothing of value, interest, or entertainment from The Hurricane. The list of people interviewed for this movie is astounding. Literally, it is a who’s who of off-road motorcycling in the world. I am ashamed to admit that I too often thought, “I didn’t know he was still alive” as the cameo segments were introduced. (That included John Penton.) The greats from both sides of the Atlantic ganged up to praise and honor the man who put them all on wheels that went fast, far, and high.
The only negative criticisms I have of Penton The John Penton Story would be because of a bit of the audio editing and an overly-long, seriously silly KTM commercial tacked on to the end of the movie. Intermittently, at the theater I saw the movie, there was a 40-50Hz hum that appeared to randomly contaminate the overall sound. I suspect it was in the film’s audio track, but it could have been some sort of interference caused by the theater’s subwoofer system. Since it was clearly not 60Hz, my suspicion would lie with the film soundtrack.
I would be surprised if KTM didn’t kick in some financing for the movie; hence, the commercial bullshit. KTM isn’t known for being a classy organization (read Ed Youngblood’s -John Penton biography for the whole disgusting story) and this blatant redirection of the subject of the movie to an obvious promotion bit for the current KTM management regime was nothing short of self-promotion and really irritating if you know how badly KTM’s mismanagement treated the Pentons. The whole story of how KTM management turned its back on more than a decade of dedication and hand-holding from the Pentons out of corporate and management greed and arrogance is disgusting. The fact that KTM nearly went bankrupt on its own, afterwards, is pure justice. The Pentons, on the other hand, did just fine with their Hi-Point line (later sold to MSR) and Penton Racing Products businesses is just sweet revenge. The thing that is clear from both Youngblood’s book and the movie is that the KTM engineers and management have/had the same mental diseases that Volkswagen suffers from today; ignorance and arrogance. Their inability to listen to customer complaints and admit to design and manufacturing problems led to their downfall and were what caused the stress and unreasonable pressure Penton lived with while trying to drag KTM into the 20th Century. 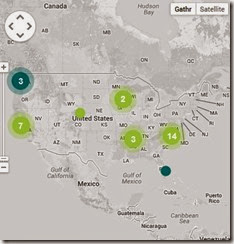 Since doing real things with real people has gone out of fashion, movies about people who did those things with amazing people are rare and precious. And by “precious” I mean hard to find, hard to see, and hard to organize. The map at right demonstrates how seldom this movie is currently being scheduled to be shown. The odds are gigantic that it won’t be anywhere near your town. There is a fix, however. As Dirt Rider magazine said, “The movie is being distributed by GATHR Films which is different then most movies. Starting June 20, 2014, anyone can request the film to be screened at a theater in the GATHR network. Once the request is submitted with time, date and place a certain number of tickets must be purchased for the film to actually run. This is a great opportunity for motorcycle stores, dealerships, and companies to host screenings and tell all their clients and/or customers to get involved. For more info on screenings visit pentonmovie.com.” You too could host a Penton off-road extravaganza. It’s not even particularly expensive.