You, me, we never thought it would happen, but it did. I am officially a cruiser owner. I bought this bike a few days after we got back home from New Mexico. I’d kept my eye on the owner’s Craig’s List ad for a month before that, assuming that when the weather turned mild it would vanish before I had a chance to look at it. Turned out, the weather didn’t leave winterish until mid-May and the owner had become slightly desperate to sell. Not that he needed the cash, but 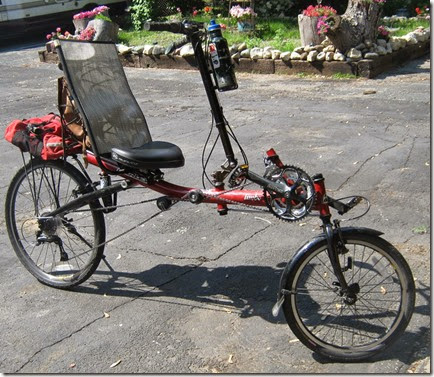 he hadn’t ridden the bike, ever, except as a weird stationary exercise machine and it was taking up room in his really cool office/mancave/studio/hideout. His kids had bought the bike for him, new, a decade earlier and he’d never felt comfortable enough on it to ride it anywhere but on the stationary rack. The tires were practically brand new. There were no scratches on the bike anywhere. It was dusty from disuse, but no part of the bike looked used. Since Burley quit making the Limbo in 2005, I did not expect to find an essentially new bicycle for a fraction of the original cost. Even so, I talked him down another $100 since I was the only person who’d expressed any interest in his bicycle after having the bike on the List for more than a month.

The day I picked it up, I sort of reconsidered the whole idea. I’ve wanted to try out a recumbent bicycle for years, but they’ve always been out of my price range and some of them are just too weird for me to consider. The handlebars under the seat idea, for example just didn’t make sense to me. Now that I’ve spent a few hundred miles in this riding position, I understand the handlebar dilemma better. In a feet-forward riding position, it’s a real compromise to find a position for the bars that doesn’t impede with peddling; mostly the peddler’s knees.

My Burley bike is no exception. By the time I’d come up with a workable compromise between a comfortable straight-line hand/arm position, my stubby legs, finding a reasonable location for tight turns, and the limitations of the bike’s bar adjustments, I’d about given up on the whole idea. Next was the seat position. The Burley bike has a really flexible seat setup, but that meant a lot of fooling around with several adjustments before I locked in on something that worked for me. Burley even offered a Corbin option, which mine has, so there is a cute level of SoCal hipness attached to my butt while the rest of me looks totally geek.

Finally, I had to deal with a pair of “designed by monkeys” issues: the terrible shifting setup (from the factory) and the crap rear fenders/lack of bag capacity. As you can see, I got the luggage rack thing figured out, thanks to the cool folks at my local bike shop, County Cycles in Roseville. A relaxing ride to Roseville and $6 later and I’m racked and ready to haul groceries, which I did on my way home last night. The shifting problem was messier. Burley had really screwed up the rear derailleur cabling and right at the cable adjustment barrel the cable made a hard turn because Burley had cut the cable housing about 6” too short. In the lowest gear (biggest sprocket) position, this meant the cable was in a bind and predictable shifting was non-existent. I think this partially explains why the previous owner had never been comfortable enough on the bike to ride it anywhere but on the stationary stand. He might not have ever shifted, even.

The bike is pretty much worked out, now. I’m still wrestling with getting a wireless speedo working on this chassis (the distance between the front wheel and the top of the bars is at the limits of wireless range and the small front wheel spins a good bit faster than some speedos can handle. Even with the screwed up speedo data, I’ve put more than 250 miles on the bike in the last month, 150 of those miles this past week, and I’m getting comfortable with the riding position. I can’t think of any reason why I’d want to have a motorized version of this frame layout, but cruising on a recumbent is sort of fun, fast, efficient, and a great experiment in aerodynamics.