March through August (2006), I watched a string of DL650 V-Stroms vanish, selling for way beyond my eBay buy-limit. All summer, I'd hoped to find a great deal a long way from home; to justify buying the bike and taking a long trip. September 3rd was my drop-dead, go-back-to-work date. On the last week of August, I won an auction for exactly my top dollar. The bike was in Cincinnati and I had 3 days to work out pickup, transportation (to Ohio), and get my cash sorted out. I took the train to Cincinnati, to met my buyer at the train station and hit the road on my new bike.

Way back (June, 2001) in an early Geezer column, I promised that I'd never buy another bike from a "kid" (anyone younger than 40). I wrote "I've been here before and I will never do anything that dumb again." I lied, but the guy selling my DL650 was an upstanding, respectable, responsible motorcycle dealer. He even sent me a picture of him on his vintage rebuilt 1978 Goldwing with a note, "I've never done anything like this on your V-Strom." If that doesn't make you comfortable with traveling 1,000 miles by train to put your money down and ride off into the night, I don't know what would.

Billy is pointing at his 3rd nipple in the picture. He is a few years younger than 40. In defense of myself, there were a lot of things about Billy's communications that made me feel fairly comfortable with the purchase. He went way out of his way to accommodate my tight schedule. He went to a lot of effort to provide me with a lot of information about the bike, what he knew about its history, and himself. And he reminded me that nobody would buy a "geezer bike" like the DL650 to abuse it, which is probably true. I'm pretty sure there is an insult some where in that comment.

I straggled into Cincinnati's Amtrak station about two hours late. Billy had made it clear to me that he had to be somewhere at 7AM that morning and I didn't unload from the train until a few minutes before seven. He's asleep in the station's parking lot when I called to tell him I'd made it. By the time I collect my baggage and get to the front entrance, Billy has the bike unloaded and ready to ride. He loans me a plate, has the paperwork taken care of, and helps me figure out how to tie on my tank bag. Now, he's really late for his other appointment. Billy returned to his life, leaving me to empty my cardboard luggage into saddlebags, a stuffed duffle on the tail rack, a courier bag, and an overstuffed tank bag. 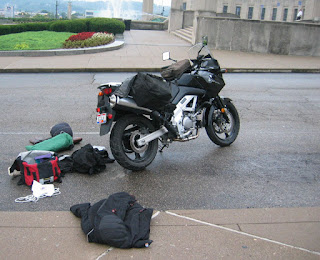 I brought camping gear, tools, a service manual, and even a patch kit and couple of tubes in case of tire trouble. I may be repeating a mistake, but I'm doing it carefully. Once I get loaded up, I take off for the station's large empty parking lot. Before I hit the road, I want to know something about this new bike. The DL650 has the same motor as my SV, but nothing else is the same. Especially with all the gear I've loaded on the bike, the DL feels more like a big tour bike than a sport bike. I've been on a sport bike for more than six years. It takes a little while in the parking lot before I feel comfortable on the V-Strom.

Once out of town, I checked in with my wife. For some reason, she sounded mildly irritated that I was not going to be home that night. That turned my meandering 2 1/2 day trip into an 800 mile blitz for home. Yeah, I'm whipped. I did get to buy the bike without any argument. More evidence that there is no free lunch.

Once I left Ohio, there wasn't much to see for the next 500 miles. Southern and central Indiana are pancake replicas of Kansas, so is a good bit of Illinois. I've seen Kansas, so, I stayed on the throttle and didn't leave the freeway until Rockford, IL. There, I deviated west toward Galena (one of my new, favorite motorcycle destinations). I took the quick tour of Galena and Grant's home town artifacts, headed toward East Dubuque, and jumped across the border into Wisconsin. I'd decided that I wanted to make it to Prairie du Chen before dark. I hit that mark and moved it out to La Crosse.

I don't usually ride at night, but when I rode out of La Crosse the visibility was excellent. I jumped the border into Minnesota and headed north on Hwy 14 before I realized it wasn't going to get dark as long as I was on the V-Strom. I was enjoying the best lighting I've ridden behind since the days when I strapped 5 Cebies to a 185 Suzuki Enduro for a 24-hour cross-country race. Not just the road, but the ditches and a bit of the countryside was illuminated by the V-Strom's dual lights.

With home in mind, I watched the ditches looking for Bambi and other varmints. Other than failing eyesight, the big reason I try not to be on the road at night is that I'd hate to kill Bambi; and break my neck doing it. Sure enough, about five miles out of Lake City, I spot a cute little deer looking like she wants to commit suicide and I take the opportunity to test the V-Strom's brakes. The road is wet and there is a light drizzle. It doesn't matter. The bike hauls to a stop with plenty of room to spare. I stop on the shoulder and take a moment to enjoy what wasn't even a close call. Bambi isn't satisfied with our uneventful encounter and decides to cross the road while I'm patting myself on the back.

A truck coming the other direction smacks into the deer and you'd be amazed at how much stuff blows out of the back end of a deer when it gets hit by a fast moving vehicle. I was amazed at how much of that crap ended up on me. At the first convenient convenience store, I stopped to hose off. I'd been wearing my rainsuit for the last few hundred miles, so I was mostly protected by the suit. The clerk was pretty upset when I came to the door, smelling and looking like something from a Quentin Tarrantio movie, but I convinced her to let me use a hose at the back of the station. While I was blasting off my suit, a cop showed up. There was quite a pile of deer poop in the blood and guts I'd washed into the lawn. He thought my story was pretty funny and let me go after emptying himself of a few jokes at my expense. He offered to piss on me to "wash" off a spot I'd missed on the back of my suit. Yuk, yuk.

801 miles from when I met Billy in Cincinnati, I made it home in good shape. Between the hose and getting rained on for the last 50 miles of the trip, I was mostly cleaned off; other than having soaked myself in sweat in the rain suit. I considered taking a trip to Duluth and back to rack up 1,000 miles in well under 24 hours, but I couldn't decide how to go about getting confirmation of my trip mileage for the Iron Butt application. So, I watched a movie with my wife and went to bed.

I learned two things on this trip. First, don't make promises you are too weak to keep. Second, don't stop to gloat when you sneak past a catastrophe. When I got home, my wife was surprised that I'd made it back so fast. I was served an angry lecture about trying to read anything from the "tone of my [her] voice" and discovered that I wasn't in trouble until I came home and got into trouble. Yeah, I know, that's three things. I'm pretty sure I'm going to forget one of them, so I'm only giving myself credit for two of the three.