Our next destination was Harry Truman State Park, about 90 miles north of Stockton. Yeah, I know, we’re wimpy travelers. We still had a house guest at home and no motivation to share our home when we got there. My only reason for going home at all was to get my taxes calculated, documented, and paid, so I really had no reason to hurry home. 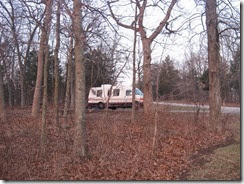 Like Stockton, Harry Truman was abandoned. Like Stockton, no services except electricity. No showers, no WiFi, no bathrooms except for one outhouse at one very remote campground. I know I’m weird, but I have no motivation to handle human waste of any sort; not even my own. So, if I can avoid shitting in my RV I will. We pretty much managed to stick to that level of pickiness the whole trip and I was not interested in making a big change in procedure at this late date. So, we headed to the end of the park for the one campground with an outhouse. Turns out, that was a brilliant decision. Again, we owned the park. Two days from opening and nobody was anywhere near Harry Truman State Park. We did see a camp host who was just in the area checking out his camper setup, but wouldn’t be on-site for at least two more days. A ranger drove past our campground a couple of times, apparently providing security. Otherwise, we owned this massive lakeside campground. 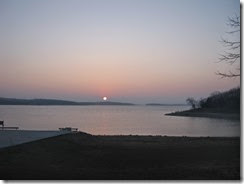 We hiked the hell out of our giant private playground. Gypsy and I played Frisbee for a couple of hours. She went swimming. Robbye and I took several long walks that day and evening. The next morning, I awoke to the most amazing sunrise of the trip. The sun looked like the moon it was so dim and small. As it rose above the lake, it grew until a few minutes later it was normal-sized. But I got a picture of that incredibly colorful, weird first moment and it will be my computer background for a while.

We had about 150 backroad miles to cover that day, so we had breakfast and packed up fairly early.
Posted by T.W. Day at Sunday, April 27, 2014