On the Way Home (Oklahoma)

The last six days of our trip home went undocumented because we were traveling through states either with minimal services at state campgrounds (Oklahoma) or were there pre-season and the campgrounds were at minimal services (Missouri and Iowa). I took a bunch of pictures of this portion of the trip, but there was never a moment on the return route where I could do anything with them. After getting through the income tax maze, beginning to sort out what goes where as we move from 64 square feet back into our 1800’s Minnesota “mansion,” and spending a few days wrestling with yard work and office remodeling (it’s not going to be an office any more), I decided to look back at our six days of undocumented travel at the end of March.

April 1 is some sort of religious moment in many states’ public services. They take half of the year for a paid vacation and slowly ramp back up to whatever level they call “working” on April 1st. To minimize the strain on the VW and maximize our enjoyment of our travel experience, we decided to diagonal across eastern Oklahoma from Lake Texoma to a little south of Joplin, Missouri then hit some of the Ozarks and Missouri parks somewhat straight north from Joplin to Des Moines. At the time, I had no idea that all of the Missouri parks would be in suspended animation, since they don’t shut down at the same time. 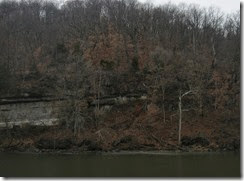 Once we left Pelican Bay on the south side of Lake Texoma (the Texas side), we were in an old world where most modern forms of communication vanish. Oklahoma is a weird dead zone of the country where WiFi appears to be only available in private homes and businesses. Our T-Mobile phones didn’t work for most of the state, mostly because we travelled some pretty obscure roads. We’d planned to stop more than once in Oklahoma, but most of the parks were closed and the private “campgrounds” looked about as inviting as Snuffy Smith’s backyard. We hooked up to US Highway 69 and kept going for a lot longer than I’d hoped and expected until Prior, where we turned east in hopes of finding something resembling a decent campground. 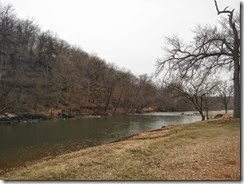 Our first hope, Springdale State Park, was closed with no explanation. It was supposed to be open, but the entrance to the park was chained. The next destination, Salina State Park was also chained. Good thing I’d snagged fuel earlier. I decided to explore OK State Highway 12 on the way out of the state. No reason, other than it looked less boring than 69 had been. It turned out to be a fairly poorly maintained, scrawny farm-to-market road that literally meandered through the northeastern corner of the state providing us with some really cool moments with that section of the Ozarks. It is almost mountainous. 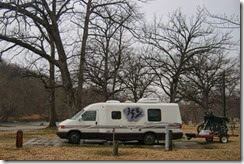 Robbye was driving when we sailed past Spavinaw State Park. “Slow down” is not an instruction she totally comprehends. If she’s been at 55mph for a while, she thinks 50mph is complying with that instruction. The first entrance to the park was barely marked and about as obvious as a rural driveway. The second entrance was chained. I wasn’t sure, but it looked like the south entrance was, at least, open. I wasn’t sure it was even a park with a campground, either. She circled back and we dove down the narrow path that serves as cliff-drop into the park. Not only was Spavinaw State Park a campground, but there was a camp host working the park. And I mean “working.” He directed us to find a spot we liked and he’d be by in a bit to collect the state’s $17. We backed into a spot with a great Spavinaw River view and hooked up to the electrical grid. The weather report had predicted a 28F night, so it was nice to have a little extra power for the room heater we’d used most of the winter. 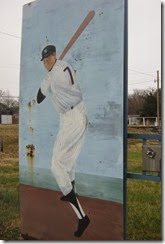 It was hard to believe the evening would turn that cold, since the day was a beautiful, balmy 55F and sunny. Gypsy and I went for a long walk to the reservoir and into “town.” Spavinaw appears to be a ghost town. There is only one surviving “business,” the local American Legion bar and the school appears to be closed. Mickey Mantle was born in Spavinaw and a short section of the road into the “town” is labeled “Mickey Mantle Memorial Highway.” Mantle was one of the most famous sports figures in the world in the 1960’s and it’s sobering to see how quickly that sort of notoriety is forgotten. A cheesy painting, a rundown road, and a hand-painted “plaque” are all that’s left of this part of Oklahoma’s memorial to “The Mick.” Of course, there isn’t much left of this part of Oklahoma either. 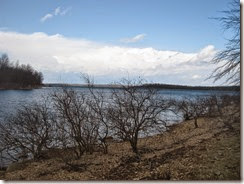 The lake is a reservoir for Tulsa, a fact that is stamped all over the dam in classic 1930’s construction style. Considering how depleted Lake Texoma was, the amount of water eastern Oklahoma is storing is impressive. The spillway was flowing strong and we slept to the sound of a waterfall.

We were up and out fairly early the next morning. Nothing to see in Spavinaw and we took the direct, backroads route out of Oklahoma into Missouri.