When I was 19, I owned a little Opel station wagon. That was 46 years ago, so I don’t remember much about that little wagon, except that it was my first real car. It could have been anything from 1958-1965. When I bought it, it had been cared for fairly well and I started right off with learning how to set the timing, change the oil, and do basic maintenance. It started every morning, barely used fuel at all, and my wife and I enjoyed the hell out of it. We even went for our first “family” trip in that little car. I only had it for a few months before some woman ran a stop light and t-boned me with her Cadillac. She was in a Cadillac and I was a hippy in a black Euro-trash mini-station wagon, so the cop decided I’d ran the light and I got a ticket and had to get the scratch on her Caddy fixed. The Opel was totaled and I was car-less. 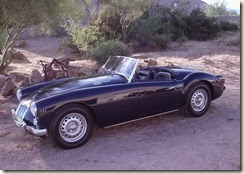 A friend who owned a small car repair shop knew a guy in the Army who was going to Germany and wanted to get rid of his car, cheap, and my friend recommended that I buy a low mileage, 1959 MGA just like the one in this picture for “only” $500. Now, you might be inclined to believe that was a great buy, especially because the car in the picture sold for “only” $32,000 last summer. You would be wrong.

Over the next six months, that worthless piece of British crap blew its head gasket a half-dozen times; in fact, every time I drove the car when the temperature was over 100oF. Since we were in Dallas at the time and it was summer and it was one of the hottest summers in Dallas history, that meant the MG was blowing head gaskets pretty much every time I turned the key. This piece of shit had a high compression, aluminum cylinder head, twin-cam, 100hp motor that was interesting for no more than a few moments before it started spitting fire from the exhaust, setting the floor boards on fire, and puking transmission grease into the cab after it tossed out its rubber stopper. When I bought the MGA, I’d built up about $2,000 in savings so that we could escape Dallas. When I practically gave it away six months later, we were broke, again.

The upside to owning that car is that I have never had a moment of envy for anyone owning a sports car of any sort. You balding, middle-age crisis characters are getting nothing but laughter or sympathy from me when you drive by in your Corvettes, Porsches, Triumphs, MGs, or even your Miatas. Your awful little cars are pitiful jokes that have been played on your billfold and self-image and you’re probably not even bright enough to know you’ve become a stereotype. If you paid $32,000 for $500 worth of leaking, under-powered, ill-designed British mechanical history, you’re not only old, bald, and suffering from Viagra overuse, you’re a fool. Because the last 17 owners of that pile of crap have invested $200,000 in keeping it running for a grand total of 35,000 miles, does not mean that you got it cheap. 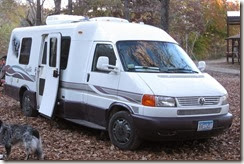 Flash forward 46 years and here I am, stuck in Albuquerque, New Mexico with the 2000 version of my old MGA; my 2000 Winnebago Rialta. I wasted a summer, trying to make this thing into a livable, drivable RV. We put enough money into the thing to buy at least 6 decent motorcycles. With 36,000 miles on the odometer, I convinced myself that the vehicle should be solid enough to take out of state and after changing the fluids, fixing a few dozen small things, adding a transmission cooler, giving myself one more hernia working on the generator, and generally cleaning up the previous owner’s stuff, we set out on what we hoped would be a 10,000 mile winter trip. About 2,000 miles later, we’re trapped in Albuquerque facing a $7,500 repair bill because the transmission torque converter failed and a variety of electronic sensors are sending so many confusing signals to the vehicle’s CPU that I get a different error code every time I start the car. Honestly, I suspect there is no hope that this thing will ever be reliable again, if it ever was.

What lessons have I taken away from all of this? One, from doing the work in the cab, I would never again own anything made by Winnebago. The company is incompetent and I doubt that they have ever produced a “Monday” vehicle in their history. All of their work is “Friday” quality, from the assembly to the design. This is a seriously amateur company that makes “Made in the USA” a shameful joke. From the welds to the wiring to the interior components, this $60,000 (new price) is an exercise in how a bunch of kids might build an RV if they were mildly retarded. I am ashamed to admit that I read this guy’s story and still bought this thing. Because the floor plan is actually pretty clever and there is a terrific support group that seemed to have sorted out many of the problems that VW and Winnebago were incapable of identifying, I arrogantly decided mileage was critical to us and this was the only way to get fuel mileage in a US-available RV. Arrogance has its price and we’re about to pay it in spades.

Two, Volkswagen may have some cool things going in Germany, but their dealership network is nationally renowned for incompetence, over-pricing, and poor service on their own vehicles. Add the Winnebago crap to a VW and you have a vehicle that nobody wants to touch for anything less than Donald Trump’s inheritance. This isn’t just a US problem, either. VW mismanagement has done a fine job of pissing off customers across the globe. If I wouldn’t consider a Ducati before, now that VW owns the bastards I wouldn’t even buy one of their t-shirts.

Three, while I’m not sure, at this point, what our end game will be on this trip, we know that we are unlikely to be RV owners by late June. My wife is ready to fly home and let me deal with fixing and disposing of the Rialta. That is probably the smart move. I can live a lot cheaper than the two of us with a dog. If we get out of Albuquerque in less than another week with less than $5,000 spent, we might continue on to California and sell it there. However, any vehicle produced since 1980 that needs a new transmission at 40,000 miles is a piece of crap. That is 1960’s quality performance and I’d expect better than that from modern British cars. Not much better, but noticeably better.

Four, my aging plan had been to look for a new Beetle when I decide I’m too incompetent for motorcycles. I had a 1967 VW convertible back in the early 70’s that was fondly remembered as “my best car ever.” The two VW Westphalia's I owned and this Winnebago have wiped that good taste from my memory completely. I think my post-motorcycle transportation plan is a senior bus pass, now. Car ownership is a pain in the ass and I’m just going to look for a home close to a bus stop and walk a lot.

What motorcycle brand or car brand do you have any confidence in recommending? I am about to purchase one of each. Thanks.

That's just my experience, but I'm inclined to stick with it.

Yikes. I can't believe it crapped out on you.

Fingers crossed it won't take too much to fix.

I've often wondered the real differences when thinking of the purchase, maintenance, and upkeep of an RV versus the gas and motel staying costs of driving a passenger car around the country.

I think you got the bad end of the deal.

Trobairitz:
The last time I did the calculation, if you travel more than about 300 miles per day, the car is cheaper. Otherwise, no hotels and restaurant food make the RV cheaper.

Thanks for the recommendations. I am recently retired myself and have spent similar money in the past on each of two used cars...a bmw and an older camaro...two winners. Sorry to hear of your misfortune. Looking forward to riding a motorcycle. I am in harley country but am looking for a smaller lighter weight more maneuverable bike per your observations.

P.S. I would like to get something like your Yamaha wr250x but they are no longer available. I wonder what would be another good similar option?

It's not very similar to the WRX, but I love the Suzuki TU250X. You can two-up the little bike around town, get killer fuel economy, enjoy the reliability of fuel injection and the simplicity of a single cylinder small motor, and look cool at the same time. I'd cross the country on a TU. And I wouldn't cross the state in a VW.