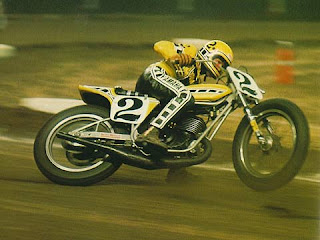 Years ago, I saw a picture of King Kenny coming out of a corner on his 500cc Yamaha MotoGP bike with the bars turned hard countersteering through the turn and his eyes solidly pointed in the opposite direction of the bike's travel. For once, the King wasn't sliding but he was clearly pushing the limits of his motorcycle way past anything Yamaha had designed for. In that same article, one of Kenny's mechanics talked about Kenny pushing on the bars so hard that he bent normal tube steel bars, so they resorted to solid aluminum bar stock so he could make it through a race with straight bars.

Of course, in the picture above countersteering appears to be a moot point, since the front wheel is off of the ground. Still, the fact that so many motorcyclists are still arguing about this point amazes me. Anyone capable of riding a bicycle faster than 5mph knows countersteering is exactly how you turn a two-wheeled vehicle. They may not know it intellectually, but if they are staying on the road they know it intuitively.

In the example to the left, Mr. Hayden is providing a terrific demonstration of setting up a hard left by steering substantially right. It's difficult to get a great picture of countersteering in race conditions and even harder on the street because the countersteering move happens early in the turn and lasts only long enough to get the bike to lean into the turn. From then on, in normal riding situations the rider has to provide very little steering to continue the lean and is usually "steering" the bike to prevent it from leaning over further. In fact, the quickest way to terminate a turn and right lean angle is to turn toward the curve.

In the shot at right, Barry Sheene and KR are at the apex of the curve and are beginning to setup their escape route toward the next straight or another turn. Still, if you look closely you'll see that both bikes are countersteering through the turn at this point.

Possibly my all-time favorite cornering photo, at left, the supermoto rider is not only countersteering but exhibits the greatest faith in traction I've ever seen. This kind of riding is why supermotard should have been the most popular motorsport in history and the fact that it isn't says everything I want to say about motorsports fans. 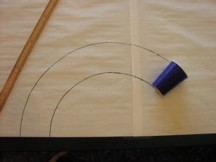 The rest of the pictures on this page are just more examples of the same. If you're still unconvinced that bikes, wheels, and tires work this way, try rolling a paper cup and see which way it turns. No matter how hard you push it or what kind of surface you make this test, the cup (wheel) is going to turn toward the smaller diameter end of the cup. No divine intervention or intelligent design necessary, it's simple, predictable physics and if you're not using physics you're counting on luck or something even less likely to provide protection in a curve/swerve/evasive maneuver.

Natures loves vacuums (99.999...% of the universe is a vacuum), but truly abhors fools. This is definitely one of those tactics that you either use or lose. When Dad taught most of us how to ride a bicycle, he said "Turn the bars left and the bike will go left." We tried it and, once we got moving slightly faster than walking, the bike went right instead and we crashed. After a few scraped elbows and knees we learned that good old
Dad is a moron and we started countersteering. We've been doing it ever since.

I can't imagine why someone would dispute countersteering......... especially if that someone rides.

I recall that there's at least one US racer who claims that weight transfer is more important in making a bike turn than countersteering.

California Superbike school have a machine set up with bars bolted to the tank and challenge people to make more than a broad radius turn using weight transfer.

Tony Foale has an analysis of how a bike steers in his book and has I recall actually measured the torque applied through the bars.