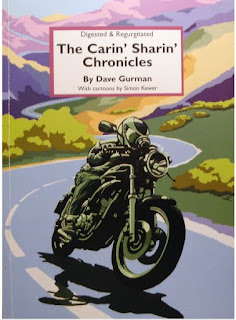 All of this book's essays were written for the British motorcycle magazine, The Rider's Digest, between the years 2000 and 2002. Dave Gurman is the current editor of that now-exclusively-on-line "magazine" and is a regular contributor to its virtual pages. The poofy title is from Dave's post-bike-courier career (social worker) and an Alexei Sayle comedy routine, which is obscure and British and typical of a lot of this book. If the title led you to believe this is the story of a touchy-feely biker in a hard-assed world, you'll be surprised and disappointed or both. Dave is, however, a nice guy and a few of these stories expose the savage underbelly of a chronically decent person trying to make his way on a less-than-civilized planet.

The language barrier is an obstacle. English is not as shared a language as I expected. For one, they have an allergy to the letter "z." I've had some Brit and Aussie friends and have been exposed to many of the odd words they use to describe ordinary objects and activities, but Gurman is more British than my past experience. In a single sentence, he can use so many unfamiliar words that I am forced to spend more time on Google figuring out what he's said as I do reading the pages of the book. "Totting-up,"  "despatch," "gonadotrophin" (it's probably what you think it is), "Cinquecento," "Vitara," "breaker," and a host of other words I either don't know or don't know used in his context baffled me in "Fatal Attraction," but I still laughed throughout that story. Even Dave's use of the word "football" is confusing. What does David Beckham have to do with football? I thought he was an underwear model or a men's perfume salesman. Come to think of it, I don't understand half of the dialog in a Monty Python skit, but they have always made me laugh.

Carin' Sharin' is a collection of essays, stories, opinion pieces, and what are, essentially, rants from a fellow old guy. A "geezer," in fact. You might expect me to be particularly favorably disposed toward such a man and his words and . . . you'd be right. Dave is a humorous, clever, insightful, sympathetic author and those characteristics shine through in every page of Carin' Sharin'. He might be a too liberal for many modern US pseudo-conservative tastes. If a moderate view of economics, sociology, and humanity is going to upset your tightly-held beliefs, you will be bothered by more than a few of Dave's insights. 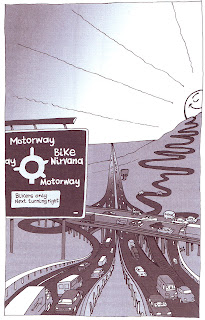 Simon Kewer's excellent cartoons might be even more upsetting, since they are rarely politically correct and can even be seen as sexist (gasp!) in the same way Monty Python's routines often disrupted the delicate American sensibilities.

With all that behind us, it's important to remember this is a motorcyclist's book about, mostly, motorcycling. For example, in "You Can Take the M Road . . . ", Dave wraps up the reason motorcyclists search out twists and turns and he describes what kind of people travel by freeway. "The Romans thought they were real clever bastards, what with their baths and straight roads that go on forever; but what good are either of them to a biker? The Welsh have got it better sussed. The looked at the mountains and said, sod knocking that lot down, let's follow the rivers and chip a bit off the edge." In our bums' rush to make the country safe for what will turn out to be the dumbest, most suicidal distribution system in human history, long-haul trucking, we are in the process of paving and straightening every interesting road in the county and doing our bit to leave behind ruins as idiotic as those Roman roads. I will never again ride down a boring highway without thinking of those "real clever bastards" who leveled an interesting countryside in the interests of NAFTA and general stupidity. Dave offers some of the best advice for taking the long, interesting route as opposed to the "time-saving" quick and boring path. "Where do you keep the time you've saved? And when do you get to use it?" Now I feel better about rarely being able to make it to Duluth in less than 250 miles.

A documentary of a few years back provided me with the unpleasant realization that there were people in England's national government who cared more deeply about democracy than in the shambles that remains of Washington D.C. It is equally disquieting to discover that a British motorcycle magazine (Rider's Digest, where all of these essays were originally published) is the place to go to a motorcyclist who is concerned with the future of motorcycling, unimpressed with but sometimes entertained by the hooligan character catered to in modern motorcycle marketing, aware of and inspired by the risk attached to an activity like motorcycling, capable of grasping the value to society provided by risk-takers and adventurers, and philosophical enough to look at motorcyclists as a diverse, entertaining, slightly-insane, sometimes brilliant speck of a broader, more conservative, barely-conscious, mass-marketed culture. Dave may have had the best insight into the reaction we should have had in the US after September 11, 2001, as he put his two cents in with "Terrorvision."

One of Dave's cultural references, Alexei Sayles, summed up a good bit of the message from the Carin' Sharin' Chronicles, "I don't want to be sold a lifestyle. I want to devise my own." Dave wrote, "A biker is someone who rides through choice. Not because it's the most comfortable way to transport a body, but because it can be the most magical way to carry a soul." Dave Gurman has definitely made a good shot at creating an individual lifestyle and he has described it beautifully in this collection of essays; and the boy has soul.
Posted by T.W. Day at Thursday, November 29, 2012

Great review. I snagged a copy from Amazon and it's as good as you said.

I remembered your review and the book's odd title when I stumbled on it at 2nd Hand Books. I'm about half way through, but as much as I'd like to dislike this Brit agitator I am finding it to be impossible to put down.

I'd just like to say how satisfying it is to discover that there are Americans who enjoyed my book in spite of my bad attitude and the fact that we are two nations divided by a single language!