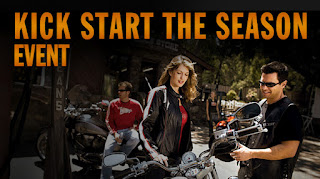 Back in late April, Tousley Motorsports had an event that has left me questioning my sanity. The dealer hosted a Victory "Kick Start the Season Event" where Victory got to show off the brand's line of motorcycles and their famous "Victory girls." Because there was free food and an opportunity to test ride any of Victory's products (except the girls), I ventured forth.

As evidenced by my experiences test riding for MMM, I sort of assumed I'll ride anything once. After sampling the food and watching the girls for a while, I wandered among the bikes to see what I might like to try out. I swung a leg over the Vision, the Judge, the Crosscountry, and the Hammer and walked around the rest of the models they had on display and ready to ride. I couldn't find anything to ride.

I admit that riding to the event on my WR250X didn't put me in a mood to straddle a hippobike. I didn't intend for that to happen, it's just the first thing I grab if I'm going somewhere. In comparison, everything Victory has to sell looks and feels 1942'ish.

The sound of those huge things rolling in and out of the parking lot didn't inspire interest, either. I could have sworn we have noise ordinances in US cities and a DOT/EPA that limits the noise from commercial products? No? So much for overbearing government regulations or even reasonable regulations. The first thing Wyatt Earp, Bat Masterson, or any other famous lawman did when you come into town is take your guns and put them in lockup. If we had any semblance of law and order in the US, the cops would confiscate bikes without mufflers. Damn that was noisy. I put my earplugs back in after I finished eating.

I started writing this rant when I came back home that evening, after a nice long off-pavement ride north of the Taylors Falls. I read it and decided to sit on it for a while. This morning, I looked at my "drafts' and reopened that experience. Some things change, some don't. Forty years ago, I would have laughed at someone offering me a ride on a bike like these. I wasn't much interested in anything that was street legal, but gigantic, underpowered, noisy machines that have no ground clearance, can't turn inside an airport runway, and are decorated with as many useless dinglebobs as a rapper's pimpmobile just wouldn't have been interesting. I didn't even like seeing bikes like that in the parking lot at a race because it always meant trouble. Twenty years ago, a friend was in the market for a "real bike" and he drug me to a series of dealers to look at Harleys, Honda Shadows, Kawasaki Vulcans, and the rest of the usual suspects of that ilk. I rode a few of them, hated them all, and couldn't wait go get back on my Yamaha TDM to erase the feel and smell of "new/old bike." After riding a Harley Sport something-or-other, I left him to his search and made a run up Mount Evans to wash away the memories. The next day, I took the long route through Ramparts to Colorado Springs to Pikes Peak and divested myself from the cruiser crusade. He bought a Sportster and it still lives in his garage, twenty years older and with less than 5,000 miles on the odometer.

At the Tousley/Victory event I only lasted for about as long as it took to inspect the plastic bits on the Victory Girls and eat a hot-dog. The memory of my disinterest in $20k garage candy has stuck around a lot longer. I get called "motorcycle bigot" about once a month by someone reading the blog or my MMM column. That is too serious a label. I don't hate these things, I just don't care about them. If they were the only motorcycles available, I wouldn't be a rider. I like my Escort station wagon better, as transportation and as a piece of engineering. Cruisers and golf are for old people, like bridge and senior housing and polka dancing. I'm only 64. Maybe later.
Posted by T.W. Day at Thursday, July 05, 2012

"Cruisers and golf are for old people, like bridge and senior housing and polka dancing." Beautiful, just beautiful... I did the cruiser thing once, never again! When I get too old to hold up my Zx-14, I'll put a side car on it!

Not sure cruisers really are for old people--ever tried to pick one of those things up, or try to wheel it around in a garage? Throw in a bad back or a gimpy knee or two and all that weight can be a real problem. I think a lot of geezers would have a lot more fun on something like the TU250 if they just want to tool around casually, but their egos get in the way--can't stand the ribbing about not having a "real" bike. Personally, I think excess weight in a bike is a big negative for any rider of any age.