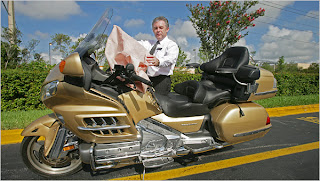 I've been researching crash statistics and biker data interpretations of those results for a future Geezer column. One of the side-effects of that research is discovering how goofy motorcyclists are as a group. Sometimes, it's hard to believe that the people commenting on helmet laws, loud exhaust systems, crash data, and articles about motorcycling in the mass media are capable of paying an internet bill to maintain their computer access. Maybe this is a terrible consequence of having computers in public libraries?
Back in 2007, the New York Times interviewed a character named Lou O’Connell who was, possibly, the first rider "saved' by the airbag on his Goldwing. In that interview, O'Connell said something that might ring true for too many motorcyclists, “The American dream is to ride a motorcycle without a helmet.” His experience in crashing his Goldwing changed his mind and, supposedly, he will always be wearing a helmet after his airbag experience. Good for you, Lou.
Regardless of the airbag bit, I want to know when riding helmetless became an "American dream?" What happened to rags-to-riches, home-ownership, public education, democracy, freedom and liberty, and all of the things I thought were the core of the American Dream? Riding without a helmet? What the hell kind of dream is that? We used to be a nation that was famous for dreaming big. Now, an Irishman comes to the U.S. to enjoy riding helmetless because he's been told that's the new American dream. How the mighty have fallen.
Posted by T.W. Day at Sunday, July 01, 2012

I was riding in Rhode Island and New Hampshire today and I find it very jarring to see so many riders without helmets. I am not a safety equipment Nazi, but frankly it makes me question whether or not these folks have the wherewithal to understand how to safely pilot their motorcycles. They certainly are displaying blatant disregard for their own safety. Most of them were also traveling below the speed limit, and they were wearing T-shirts and shorts, though a surprising number had gloves on. They seem to believe that when they crash they'll be able to do a hand spring down the road and be OK.

I'm not sure there is such a thing as a "safety equipment Nazi." The characters who want to feel the wind blowing between their ears seem to think that any comment on their insanity is an infringement on their "freedom," but that's not a rational definition of any sort of Nazi. You are free to be an idiot, I'm free to call you one.

I've been encouraged by the number of people I see wearing gear in Minnesota this year. Certainly not everyone, but more than past years. There appear to be more adults on bikes, especially commuting, than BABies. At least that's true in the Cities. A friend who lives in WI says he hasn't seen a helmet in months. Most of these old dudes have made their deposit into the gene pool, so Darwin isn't going to get much value from their demise. It's a crazy world out there.

I wear mine but I do believe if one does not want to they rolls the dice and moves their mice.

I have ridden long enough to know that people will do whatever they want on bikes. I not their mother and I say without offense intended, neither are you.

By the way Minnesota IS the home of safety-Nazis and it's not just motorcycles. Try letting your kid take sun screen to school. Because the school has a zero tolerance policy on drugs...sun screen is verboten. That's just one example.

As always, I'm clueless. What hazard does sun screen present? I'm not sure that's a case of safety nazi-ness. Sounds more like academic stupidity.