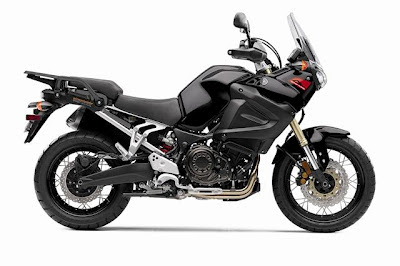 I did get to ride the Super Ten this past weekend (June 16-18). All of my usual bitchiness aside, I liked the bike a lot. I put almost 400 miles on the Super T, with at least 200 of those miles on gravel and wet clay. The bike performs well under all conditions. Stay tuned for the review in September's MMM.
Posted by T.W. Day

I hope you get the ride on the bike. It didn't blow my skirt up, but it is a nice bike with a lot of good features for the price point. Your take on it will be interesting.

I ride a WR250R and have it rigged as a mini adventure bike. It is the perfect bike for a lot of rides especially multi-day rides off piste. I will ride it to the Yukon next summer. I get better than 55 mpg with it - around 60 with stock gearing when riding off the freeway. I have plenty of time to ride to Inuvik as I'm retired and have no time restraints for that ride.

I also ride a KTM 990 Adventure. It is better off-road for me than the GS bikes I owned in the past, and lighter than the GS/Tenere; geezer manageable. Kind of a big WR really, and my Giant Loop luggage works on both the WR and KTM. The most fun of the big adventure machines IMO.

The bigger bike allows me to quickly cover 600 or 700 mile days to get to Utah, let's say, go explore the back country for a few days, and then blast home. Not the domain of the WR or bikes of its ilk. I have done this on 650 bikes, when I had to, but the bigger bikes demand less of me on long road days. I'm thinking here of things like prairie winds that bike heft and horsepower help to manage.

I'm fortunate to have a choice of motorcycles allowing me to ride like I want to with, or without, time considerations. But, a lot of folk are limited to one bike and the heavier more road worthy ADV Touring bikes afford a lot of flexibility for them. Hence their increasing popularity.

I suspect most will be ridden like an SUV is driven i.e. mostly on road in good weather conditions, and rarely off road, or off road for any extended periods. But, if the rider wants to take that once in a lifetime ride to Prudhoe Bay or Inuvik, they can do it with a big trailie more comfortably than on a smaller bike, and probably with less overall road time invested.

Gas mileage is a consideration, but tank range is more critical out west. Few of us buy big trailie bikes for the gas mileage, though it may influence a purchase. My GS bikes got me a routine 50 mpg. I live out west, and my 220 mile range on the KTM is an issue I have to work around, but I bought the bike for other reasons.

Obviously, your experience is something I'm hoping to try out with the Super. I have no way to validate that perspective from my own experience. I don't two-up much, so the limited seat space on my V-Strom 650 is rarely an issue. I have never experienced a problem with the V-Strom in high winds (except the 50-70mph stuff that blew me off of the Dempster and I doubt a big bike would have done better in 6" of chopped rock). I suspect my WR250 would have been a more stable bike on the Yukon trail.

I ride across South Dakota, Nebraska, and the western states fairly often and 650cc is plenty of power for everything I've traveled from high winds to mountain roads. I don't have a need to cruise above 90mph, so a liter bike's top end capacity would be lost on me. I suspect my 120mph days are done. My last big trip with my grandson was pretty much done at 70mph and under and it might have been the most fun I've had on a motorcycle. My brother and I looped Lake Superior last summer, me on the 250 and him on my 650, and I spent most of the trip waiting for him to catch up.

The whole Goldwing, BMW, and big adventure bike thing has been a mystery to me since I began street riding. I'm looking forward to experiencing it. I'll never be able to afford it, but it will be fun to try on a rich guy's pants for size.

I've been up the Dempster and Dalton on big bikes when I was working and didn't have a lot of time to invest. They did the job just fine, except for one 650 but it was a poor choice to begin with.

I don't see a 650 V-Strom as a particularly small motorcycle. It is one of the most capable on the market - no need to justify your admiration of it.

As for not needing or using the hp of a litre bike, well I think it is Bog Dog who says something like "17 hp is all it takes to go around the world, all the rest is wheel spin".

I don't know if I'd do the Dempster more than once. The ride is hard, but the scenery isn't worth the trouble. Fuel costs are outrageous and other than the Tombstone campground I was mostly unimpressed with the trip. I want to do the Dalton, which is what I intended to do the first time I went north.

The only downside I've found with touring on the WR is fuel economy (no better than my V-Strom at WR speeds) and the boredom factor. Long, wide, straight roads are just a waste on the WR. They are monotonous on a bigger bike but they're really boring at 60mph (the speed limit). When my brother and I looped Lake Superior, I spent a lot of time playing in ditches and taking every mining and campground road I could find to stay interested in the road. There is a lot of nasty crap in Canadian ditches.

In CA, you could buy spray-on dirt for your DP bike and Range Rover. I think a lot of "adventure bikes" never have adventures.