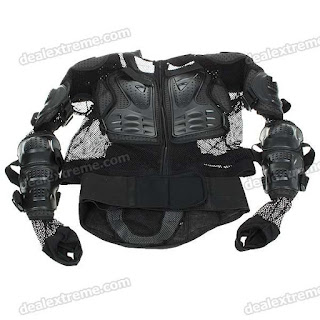 Being the lazy, cheap, often gullible fruitcake I am, I decided to check out the incredibly cheap body armor I found on-line with DXdealextreme. For $54 delivered, they appeared to be selling upper body armor similar to the expensive spread. Since practically everyone in the US is selling the same crap from the same Chinese factories, I "reasoned" going direct to the Chinese distributor might be a pretty quick and efficient way to get my upper body protected. After two weeks of waiting for delivery (which put the gear in my hands exactly two days after I last went dirt riding), I got a tiny package in the mail from DXdealextreme. I ordered XL and they shipped a tiny thing they labeled "medium." I haven't been this "medium" since I was 12 years old.

I fumbled around the DXdealextreme website until I found the customer complaint area and sent them a note describing the problem and asking for a right-sized replacement. The following is what I have received from the company in the last month:


So, now me and Paypal are going to wrestle with how I get my money back from DXdealextreme. From here out, I am going to save my money and avoid anything that appears to be shipped from China.

It just gets better. Finally, DXdealextreme's representative has agreed to send a replacement for the original screwed up order, but . . .

I will spare my gentle readers from the rest of this transaction, no matter how it transpires, but I'm going to consider this a lesson-well-learned and try not to stumble into the Chinese money pit again.
Posted by T.W. Day at Saturday, June 02, 2012