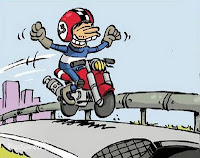 "Retarded" is a poor choice of words.

Maybe so, but it still feels right for the situation.

Could've used "insane". After all, the definition is doing the same thing over and over and expecting a different result. In your case, buying from a "kid".
It's almost impossible finding used bikes now that haven't been molested (chopped fenders, useless led signals etc) so it's an affliction we all have to deal with.

I was looking for a word that described deviation in my normal behavior. "Insane," while fitting the situation for most people, simply describes my normal status.

The source for used bikes with low miles are almost always "kids," though. Their short attention span and arrogance makes them the perfect sales victim. Their math incapacity convinces them that they are getting a good deal when they buy a brand new bike on credit. As soon as the next shiny thing (often a high maintenance girl friend) attracts their attention, the bike has to go.

Old guys keep their bikes until the metal fatigues. Who wants to buy a well-maintained, high mileage geezer bike when nearly new stuff is available? Never mind that the nearly new stuff is nearly wreaked by abuse. I knew when I started my search that I'd be buying my WR from a kid because that's the kind of bike it is.