This has been a tough 24 months. In the spring of 2009, my step-mother died. Later that year, two friends bought the farm, one of whom was considerably younger than me. Spring 2010, my father died: he was almost 91. This past winter, one friend announced he had been diagnosed with a fatal cancer and another died in a car crash. There is nothing like losing friends and family to remind us of our mortality. There is nothing to like about being reminded of mortality. I know that my father's 91 years seems like a long, long time. It's not.

Thirty years ago, when he was my age, my father didn't have a personal doctor. He lived 64 years without a single cavity, broken bone, or even a bad cold. He'd lived through the Great Depression, multiple WWII landings in North Africa and Europe, kamikaze near-misses on a Pacific aircraft carrier, forty-five years of teaching high school and coaching football, tennis, and basketball, and being the sole support for a five-kid family. Up until his first major medical event, he was a state champion "over-30's" tennis doubles competitor for more than 30 years. He was knocking down 3-pointers and kicking his kids' and grandkids' asses on the basketball court well into his sixties. He worked an 18-hour work day until he retired. In his late-sixties, cancer and his cancer therapy took away most of his sight, hearing, his mobility, his golf game, and a good bit of his life. A heart attack in his mid-70s mostly bound him to his home. Every year, he lost a little more of his physical life until he was only able to leave home in an electric wheelchair. After having a ramp built for his front door, he had the chair for about two weeks before he died.

Like a kid with a new bike, Dad loved his electric scooter. He ripped out of the house, leading whoever was going with him, blasting through residential intersections. It wasn't a matter of not looking. Dad couldn't see a car coming if it were topped with flashing lights and painted like a GSXR. He reminded me of an old guy with a new Harley and about twenty minutes of riding experience. Unlike that stereotype, my father didn't have much to lose. For a change, he was having fun and experiencing a little freedom from the limitations of his life. For the first time in his life, he might have had some empathy with my love of two-wheeled adventure.

When I was twenty, I thought I had all the time in the world. When I turned thirty, I felt like an old man and thought it was all downhill from there. When fifty rolled around, forty seemed like the prime of youth. At sixty-something, time is the only thing I know I don't have to spare. Time is the only completely non-renewable resource. You get however many years you get and, then, you are done. 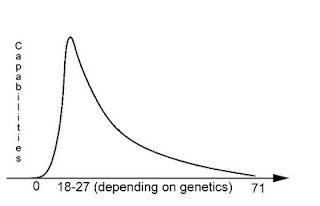 I suppose the next stage is where I will begin to realize that no matter what I do, I will never be in better shape than today. That's got to be the definition of "being old." At some point in life, exercise, diet, and self-discipline lose their power over age. The day you know that every facility you possess is on a non-stop trajectory downhill, is the moment you switch from feeling alive to dying. Of course, that's illusion. As Bobby Dylan said, "He not busy being born is busy dying." The arc of our lives is a quick peak with a long decline, a skewed-left bell curve of abilities, endurance, and energy.

With that in mind, most of the piddly stuff of life shrinks to insignificance. Work, politics, money, possessions, Facebook, and all the silly crap people allow to get between their lives and the things that matter all shrink to insignificance. In the end, family, the friends you've made, adventures and inspiring sights, and the good and bad you have done are the sum of a life. It would be terrible to have put off living until retirement and discover that you've slipped past that point of no return before even getting started.

WWII set my father back some. The death of my mother, when she was 34 and he was 36, took some more starch out of him. His desperate desire to "fix" his broken family inspired a hasty remarriage and an instantly large family. The stress from all of those events and decisions pushed him into a shell where he stayed for most of his life. His quest for adventure was so suppressed that a family hike up an Estes Park mountainside was over-the-top extreme sport.

In his mind, I was always "that dumb kid." I've lucked out and none of life's real catastrophes have struck me directly. In his mind, my motorcycling jones was a crazy, irresponsible, incredibly dangerous addiction that probably should have been treated with medication and corporal punishment. As should have my backwoods backpacking, white water canoeing, mountain biking (which started with a 40 pound Schwinn on our neighborhood hills), and my rock and roll guitar-playing habits. He was probably right about bicycling because I had more near-misses and catastrophic hits on bicycles than anything I do, other than household repairs.

It took me years to realize that WWII was all the adventure my father needed or wanted in his lifetime. His last couple of weeks of life were, maybe, the first time he connected to the fact that I'm still accumulating a tiny portion of the lifetime experience he collected in his twenties between 1942 and 1946. Hopefully, I will have better memories of my experiences than my father held.
Posted by T.W. Day at Monday, June 06, 2011